A woman who lost an amazing 98lbs in a bid to save her marriage has revealed how she ended up finding love with a man 26 years her junior.

Patty Aquilina, 55, from New York, a hospital receptionist, started her weight loss journey in 2017, after ballooning to 294lbs, struggling to shift the baby weight she gained after having two children.

She started doing rigorous exercise and dieting, because she thought that losing weight would save her marriage, which was miserable after not having sex with her husband for three years.

She lost 98lbs in a year, dropping to 196lbs and also underwent body lift surgery to remove excess skin, forking out more than $10,000,

But her ex still did not notice her and the ‘spark was gone’, with the couple divorcing in January 2018 after 25 years of marriage.

Two months later she joined dating site Plenty of Fish and met signage designer Brian Csogi, who is now 30, and the pair have been dating for four years. 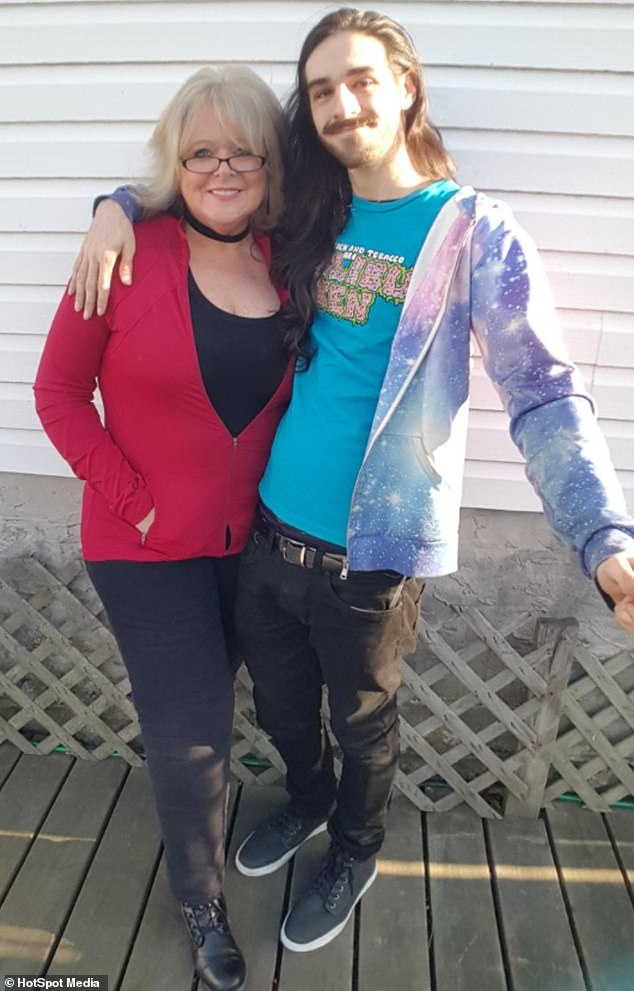 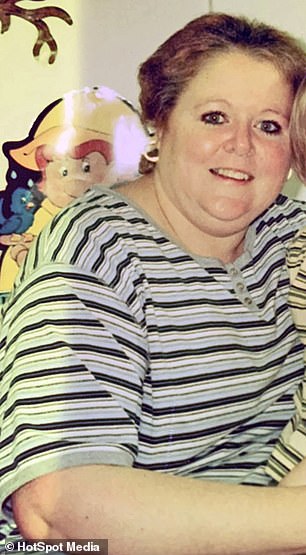 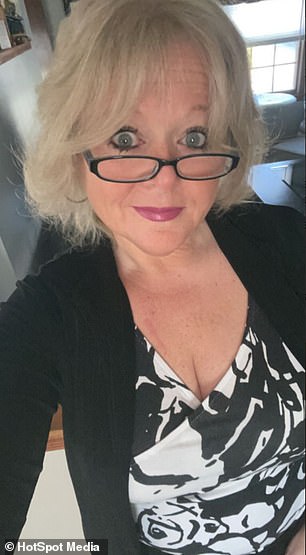 Patty Aquilina, 55, from New York, a hospital receptionist, started her weight loss journey in 2017, after ballooning to 294lbs, struggling to shift the baby weight she gained after having two children

She began to have problems with her weight after she struggled to shift the pounds she gained from giving birth to two children.

By 2017, she was unhappy in her marriage and had not slept with her husband for three years, thinking that losing weight through rigorous exercise and dieting could save it.

But even when she lost 98lbs in a year and had surgery costing more than $10,000 to remove excess skin, she said her ex still did not notice her and they divorced in January 2018 after 25 years.

Two months later, she joined dating site Plenty of Fish and said: ‘With my new body and lease of life, I was ready to date. 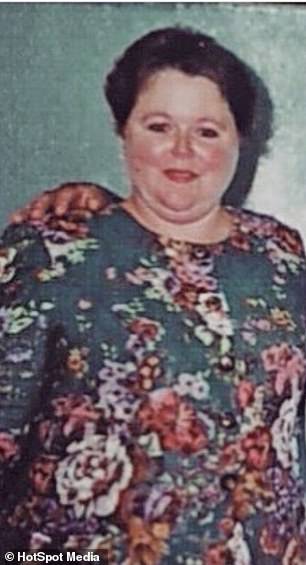 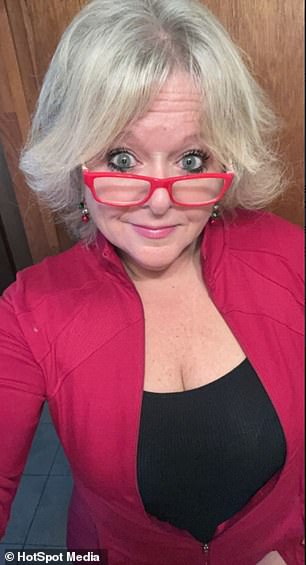 Patty, pictured left aged 48 before her weight loss at her heaviest and right in 2020, admitted she was shocked when she joined Plenty of Fish and received messages from men in their 20s

‘I wrote on my profile that I was 52 years old and uploaded some of my best photos.

‘Minutes later, I received loads of creepy messages from guys in their 20s.’

She admitted that she thought they had read her age wrong and told them how old she was but they told her it was not a mistake.

Patty added: ‘I was gobsmacked. I had no idea a man in his 20s would be attracted to someone my age. Admittedly, it was a huge boost to my self-esteem.’

The 55-year-old soon grew tired of the vulgar messages but things changed when she saw Brian come up on her phone.

Patty says: ‘Unlike the others, he wanted to get to know me and asked about my kids.

‘Stunned, I answered that I was old enough to be his mother! But he didn’t care.’ 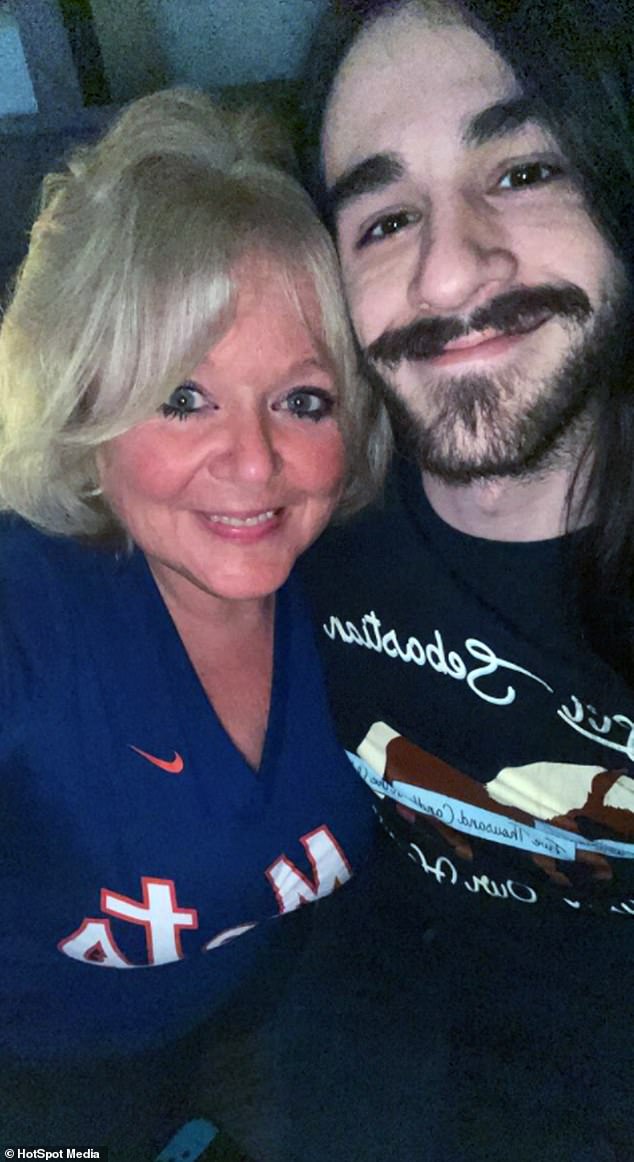 When Brian, pictured with Patty in 2020, came up on her app, she said things were different, as he wanted to get to know her and asked her about her children

The duo chatted and then met up the next week.

Patty says: ‘Brian walked into the bar and I saw he had long, shaggy black hair and looked like he was in a rock band.

‘He was gorgeous and I felt a connection straight away.

‘After chatting I realized he was close to my son’s age but we both laughed it off.

‘Soon we were making out and because of our age gap, it felt naughty. In a good way!’

Patty and Brian feared their families would find out about their age gap and met up a week later in secret. 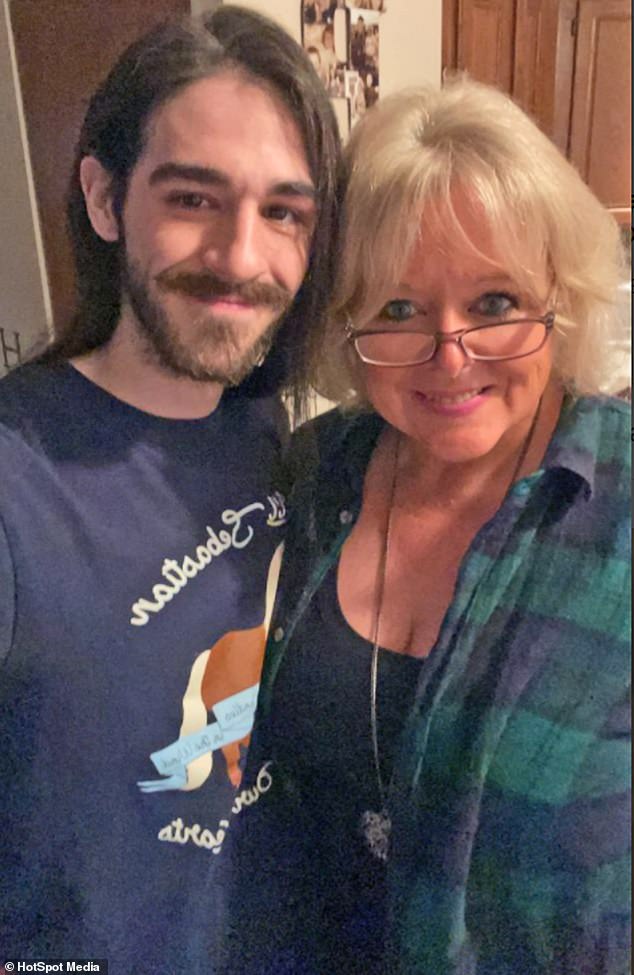 The couple, pictured in 2020, met for the first time in a bar and then again a week later. They kept their relationship secret for a number of years as they were worried about what their families would say about the age gap

The 55-year-old said: ‘I couldn’t invite Brian over as I lived with my two kids, both in their 20s.

‘Brian lived with his parents too. So we booked a hotel and that night, we slept together. It was so passionate.

‘After that, every week we met a hotel and I lied to my son and daughter. Each time, I told them I was seeing a friend.

‘After years of boring missionary, Brian opened my eyes to a new world. He brought out sex toys and all the latest moves.

‘And unlike older men, he cared more about my needs than his own. He made me feel so young again.’ 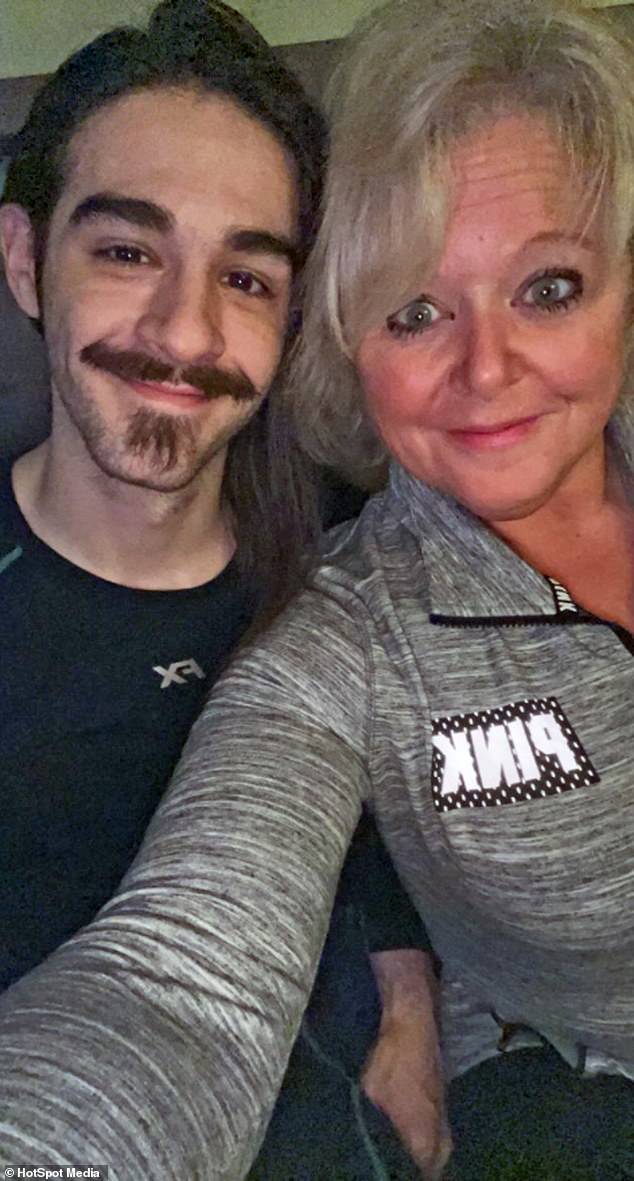 Patty and Brian, pictured in 2019 when they started dating in secret, have had to endure dirty looks and comments from strangers but say that they laugh them off

Patty and Brian fell in love and became a couple but have had to endure dirty looks and comments from strangers which they say they ‘laugh off.’

The 55-year-old said: ‘Once we went for a couple’s massage and everyone at the spa stared at us.

‘Another time we were at the supermarket and the cashier thought Brian was my son. We laughed about it afterwards.

‘My friends on the other hand congratulated me on bagging such a young man, which was nice.

‘But I still couldn’t bring myself to tell my children as I was worried about how they’d react.’

Their secret relationship continued until Halloween 2020, when Patty’s children found out.

Patty had taken photographs of herself and Brian in their costumes, which were meant for her friends but she accidentally sent them to her daughter.

She added: ‘Freaking out, I quickly called her and had to admit everything. She was in tears. She couldn’t believe how long I’d lied to her. 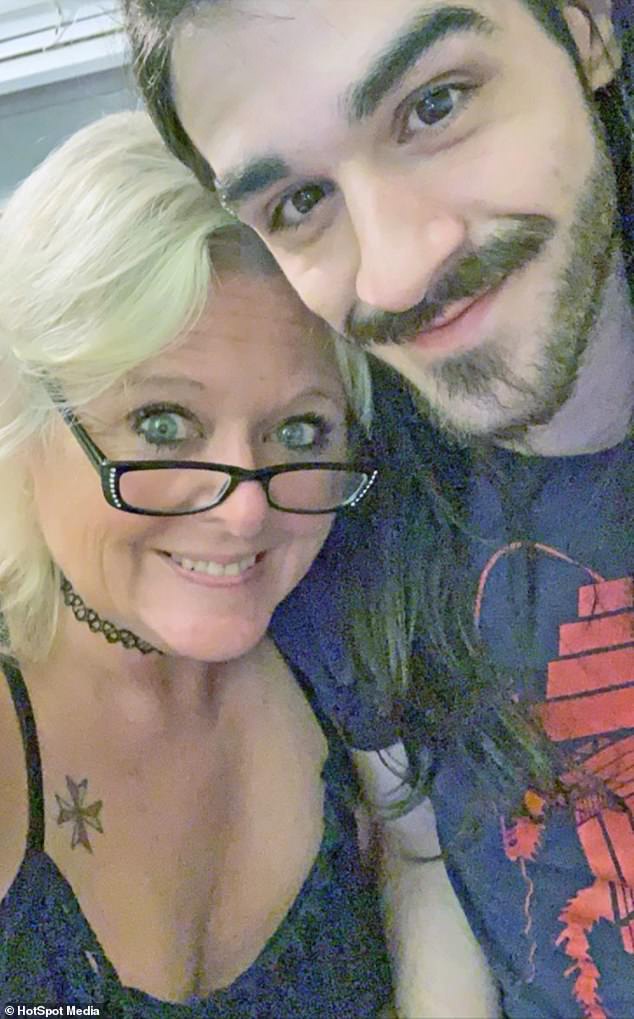 Brian and Patty, pictured in 2020, finally told his parents about their relationship last year, admitting they were ‘shocked and needed time to get their heads around it’ but that his mom now gets on better with her better than Brian’s past girlfriends

‘I promised to end the relationship as I didn’t want to disappoint her but she said she was happy if I was. I’d never been so relieved.

‘Days later I came clean to my son too and he didn’t mind either. He just felt bad for me living a double life.’

Brian and Patty have been together for four years, finally telling his parents about their relationship last year.

Patty said: ‘They were very shocked and needed time to get their heads around it.

‘But now his mom says she gets along with me better than his past girlfriends.

‘Brian and I have been through a lot but we have come out the other end stronger than ever.’ 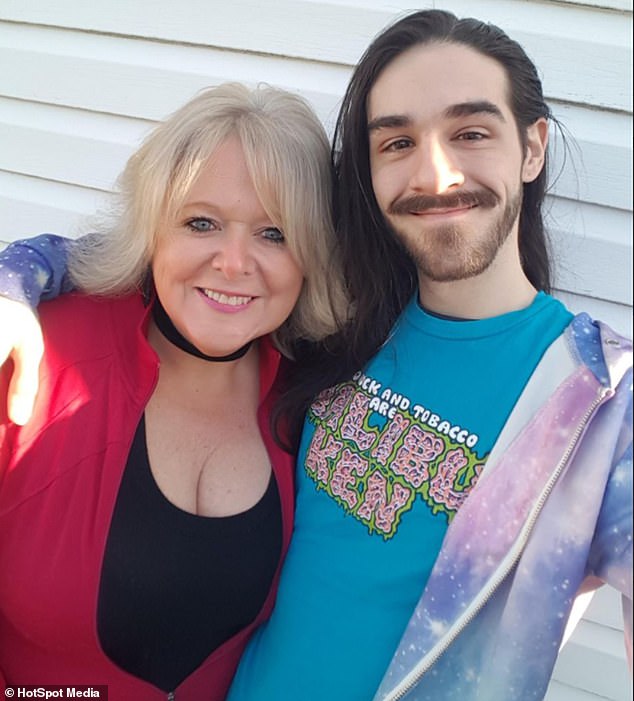 Brian and Patty, pictured in April 2021, said that they love each other very much and Patty said she is the happiest that she has ever been with the love of her life

The 30-year-old said: ‘I’d always been attracted to older women. I value someone’s wisdom and mindset over their age.

‘When I first saw Patty, she out-shone every woman I’d ever met. I was completely unphased about how old she was.

He continued: ‘Being with someone 27 years older than me has been so fulfilling. Patty teaches me things every day and we both learn things about each other’s generation.

‘For a long time, I did worry about what my family would think. They are very traditional and conservative.

‘But the secret aspect of it all made it so exciting too. Not a single second feels wasted with Patty. I love her so much.’

Patty said: ‘Most men in their 50s want to stay in and watch TV on the sofa.

‘While Brian is so adventurous and full of life. To women considering dating a younger man, I’d say, just go for it.

‘Brian is the love of my life and I’m the happiest I’ve ever been.’