Moscow’s state TV hosts have claimed that Britain is at war with Russia in a new propaganda outburst.

Vladimir Solovyov – dubbed ‘Putin’s Voice’ – concluded in a discussion over a British volunteer who died in Ukraine that ‘Britain is at war with us’.

He was talking to political scientist Vladimir Kornilov on a leading Russian show about the death of Jordan Gatley.

Mr Gatley, who left the British Army in March, was reportedly killed in the eastern city of Severodonetsk earlier this month.

Kornilov claimed the volunteer fighter’s father said he left the British Army to ‘serve elsewhere’ and Britain is now ‘glorifying these mercenaries as heroes’.

He then declared the UK is ‘admitting the fact of war’ to which Solovyov answered on Russia-1: ‘So – de facto – Britain is at war with us.’

It comes as former Russian president Dmitry Medvedev – a close ally of Vladimir Putin – suggested Ukraine would not exist on the world map in two years’ time. 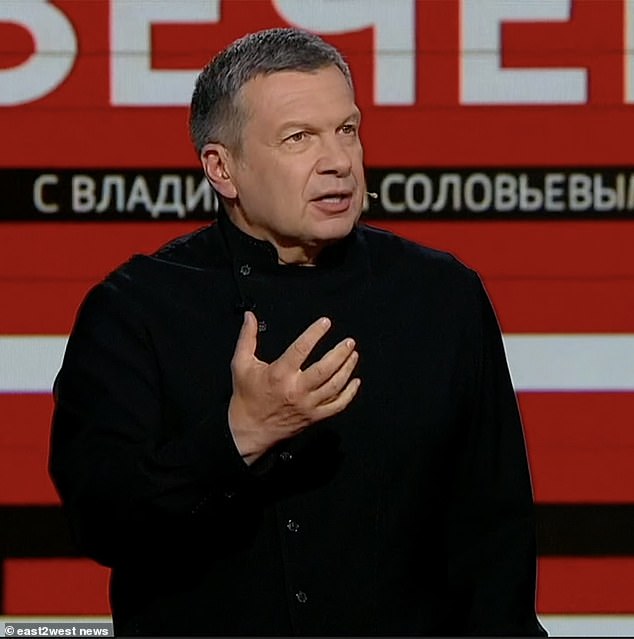 Kremlin pundit Vladimir Solovyov (pictured), a propagandist aka ‘Putin’s Voice’, said: ‘Britain is at war with us’ 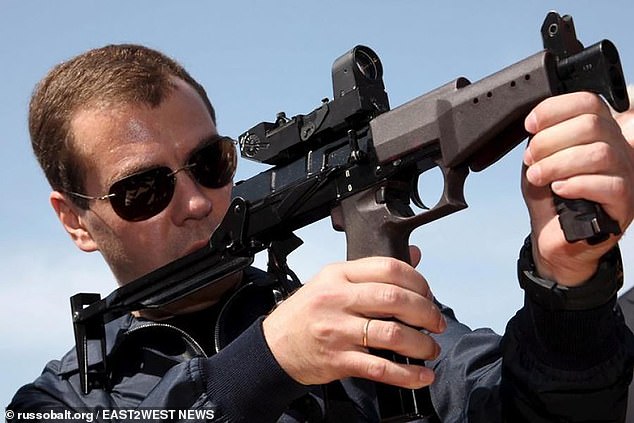 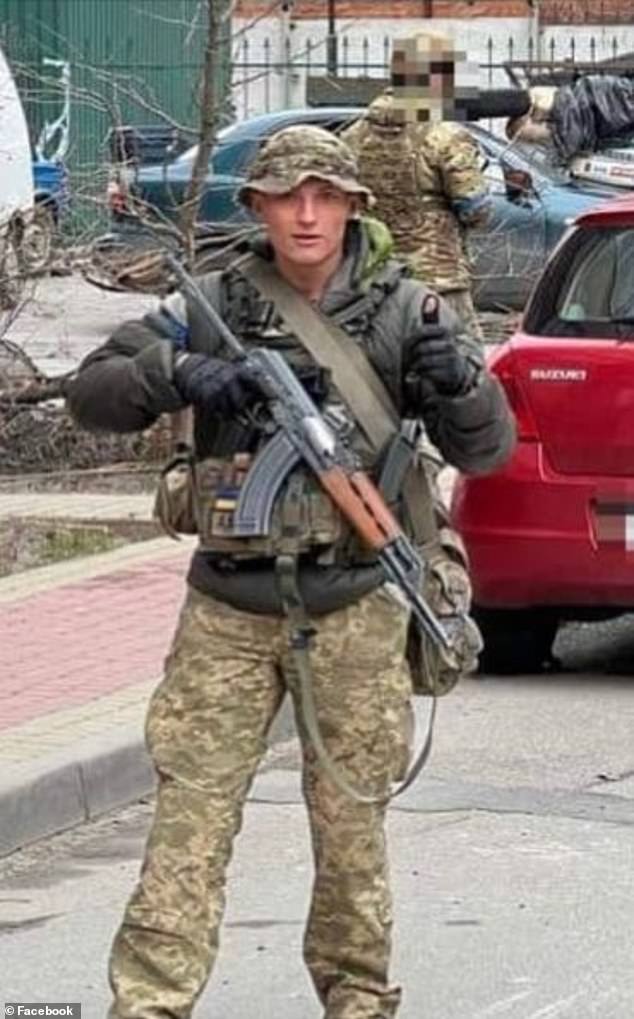 ‘But he writes there that he served in the British Army until March this year, and then he decided – this is very important – to continue serving in other regions.

‘So he didn’t even consider it as leaving. As I understand it, he didn’t leave. So he must have been reassigned to some service.’

In fact, British reports have made clear he did leave the army before going to fight as a volunteer in Ukraine.

And Dean Gatley, father of John, did not mention him ‘serving’ on social media.

Instead Mr Gatley wrote: ‘Jordan left the British Army in March this year to continue his career as a soldier in other areas [.. and] went to the Ukraine to help.’

But propagandist Vladimir Solovyov – aka ‘Putin’s Voice’ – waded in and claimed: ‘The father de facto admits the involvement of British forces in the conflict.’

Kornilov responded: ‘Quite right [….] under British law, if he really joined some other foreign army and is fighting against a country that is not officially at war with Britain, he is a mercenary.

‘So it turns out that Britain is now glorifying these mercenaries as heroes and admitting the fact of war with the Russian Federation. There is no other explanation.’

Solovyov declared: ‘So – de facto – Britain is at war with us.’

He threatened: ‘So it is up to comrade [Dmitry] Rogozin [Putin’s space chief] – suggesting he should aim hypersonic Sarmat [Satan-2] missiles at Britain.’ 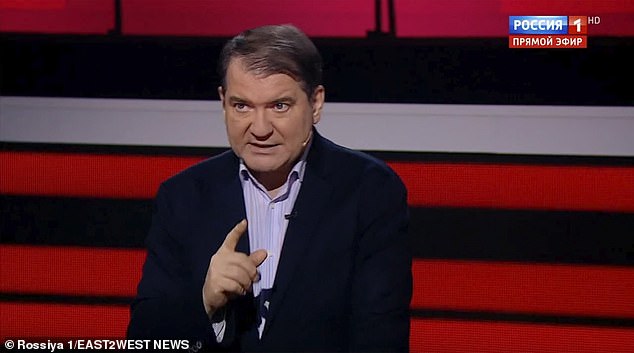 In his blast, outspoken Medvedev also taunted the West by claiming that Ukraine would not exist by 2024.

The former Kremlin president – ​​who between 2008 and 2012 had his finger on the Russian nuclear trigger – said: ‘I saw a report that Ukraine wants to receive LNG [Liquified Natural Gas] from its overseas masters under a Lend-Lease Treaty, with payment for delivery in two years.

‘Otherwise it will simply freeze to death this coming winter. Just a question. Who said that Ukraine will exist at all on the world map in two years?

‘Although the Americans no longer care – they are so invested in the anti-Russia project that everything else is nothing to them.’

Medvedev also claimed that the West will reap the main harvest from sanctions against Russia, as its economies plunge.

‘We are eagerly expecting yet another package of European sanctions and great sanctions solutions by Grandfather Joe [US President Joe Biden] over which the authors of these very sanction immediately begin to come up with schemes to circumvent them,’ he said. 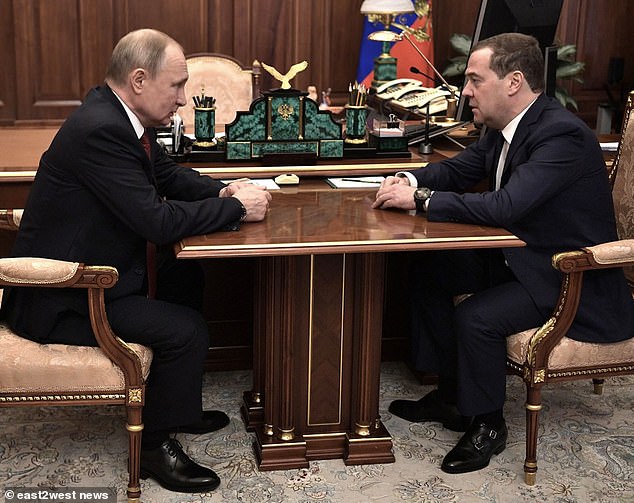 Medvedev also claimed that the West will reap the main harvest from sanctions against Russia, as its economies plunge. Pictured: Russian president Vladimir Putin with Dmitry Medvedev, in January 2020

But some politicians in the West now realize ‘they cannot survive without our country’, he added.

Medvedev, who is now deputy head of Putin’s security council, also warned: ‘I won’t reiterate about inflation, prices for all types of fuel and forecasts on a collapsing economy.

‘All information can be openly accessed. And this is only the first summer month. We are waiting for autumn, when they will have to reap the main sanctions harvest.

‘Meanwhile, the steam engine of their [economies] of services and digital currencies is heading towards a wall at full speed.’ 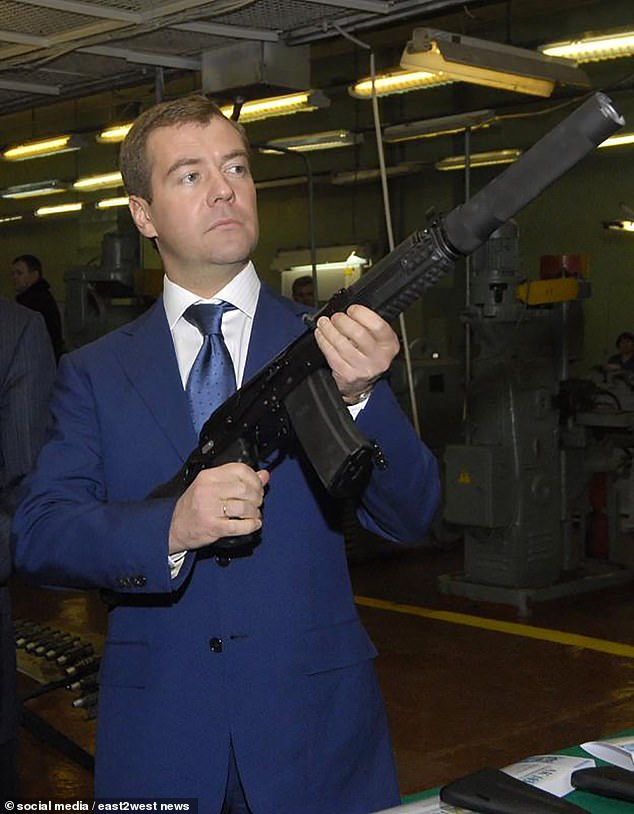 Dmitry Medvedev, who is now deputy head of Putin’s security council, and a former Russian president and prime minister

Solovyov also demanded that there should be ‘no truces’ with Ukraine. In an outburst on state TV he said: ‘Hands in the air, surrender, that’ s it.

‘There should not be a single truce….They are afraid of losing all of the Black Sea region. They understand that we will not stop.

‘They understand that it is crucial for us to reach Transnistria, that’s it, full stop.’

Transnistria is a strip of land – controlled by the Russian army – in Moldova, with a border with western Ukraine.

‘The way the Nazi regime behaves, it’s clear why they need a ceasefire – to get more weapons, to train, to bring in Western armaments,’ he said.

‘Total unconditional surrender. And then a tribunal in Lviv for the whole bunch of Ukro-Nazi criminals.

‘All to sit in the dock [starting with Volodymyr Zelensky]. They will be judged by the Ukrainian people for the crimes committed by these Ukro-Nazis.’ 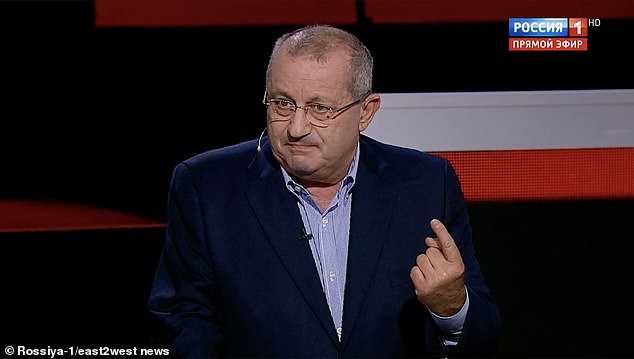 Solovyov also carried an interview with a studio guest – Moscow-born political scientist Yakov Kedmi (pictured) – on his demand that the two British fighters, sentenced to death in the Donetsk People’s Republic, should be exchanged for high-profile prisoners in the West 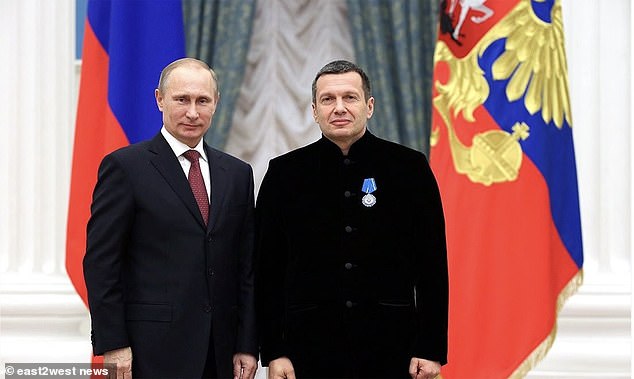 Solovyov also demanded that there should be ‘no truces’ with Ukraine. Pictured: The TV presenter with Putin at a state award ceremony in Kremlin in 2013

Solovyov also carried an interview with a studio guest – Moscow-born political scientist Yakov Kedmi – on his demand that the two British fighters, sentenced to death in the Donetsk People’s Republic, should be exchanged for high-profile prisoners in the West.

‘One Englishman to be exchanged for [Julian] Assange [jailed WikiLeaks founder, held in Britain pending a US extradition. request]who will be given the right to travel to any country in the world ,’ he said.

The second should be swapped with Russian arms dealer Viktor Bout, in jail in the US.

Solovyov – who often expresses Kremlin opinion – said: ‘A good idea, I like it.’