Senior Republicans are keeping up their attacks on the Biden administration’s attempts to tackle misinformation, claiming internal documents show the Department of Homeland Security’s disinformation board would have ruled on what was true and what wasn’t across a broad range of issues.

Republican Senators Chuck Grassley and Josh Hawley wrote on Wednesday to the department demanding more information about how it would have worked.

They released a string of internal documents, provided by a whistleblower, they said showed the Disinformation Governance Board (DGB) would have worked with social media platforms to enable the removal of user content.

They said the details showed the board would not just have focused on foreign threats but areas of legitimate political disagreement, such as the validity of elections and the efficacy of COVID-19 vaccines.

‘The First Amendment of the Constitution was designed precisely so that the government could not censor opposing viewpoints – even if those viewpoints were false,’ they write in their letter.

‘DHS should not in any way seek to enlist the private sector to curb or silence opposing viewpoints.

‘It is therefore imperative for DHS to provide additional clarity regarding its policies and procedures for identifying and addressing [mis-, dis- or mal-information] MDM as well as its efforts to ‘operationalize’ public-private partnerships and the steps it is taking to ensure that it does not infringe on the constitutional rights of American citizens.’ 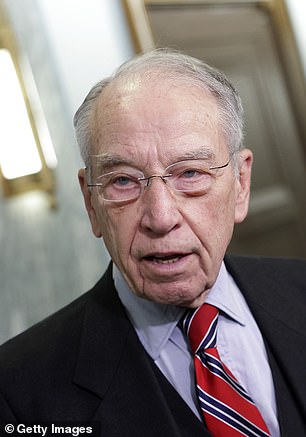 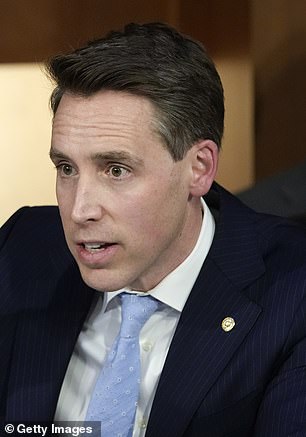 Republican Senators Chuck Grassley (left) and Josh Hawley have written to the Department of Homeland Security seeking more information about its ‘paused’ Disinformation Government Board. They cite whistleblower documents that raise fresh concerns about its links to Twitter 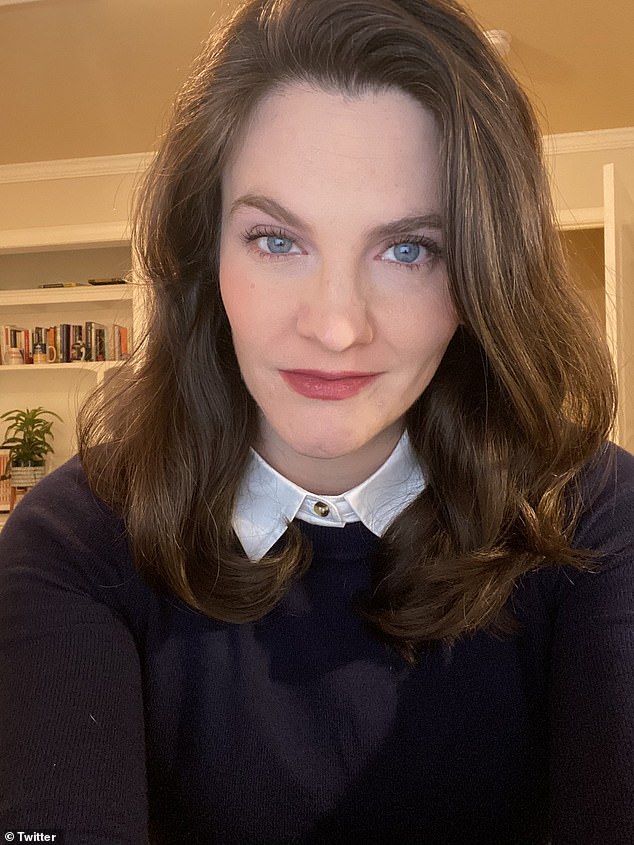 Details of the disinformation board triggered a wave of controversy when they were made public.

Its leader Nina Jankowicz resigned after it was revealed that she had promoted claims about former President Donald Trump’s links to Russia and about Hunter Biden’s laptop that turned out to be untrue.

And she faced ridicule when it further emerged she had recorded a TikTok post replacing the words of the Mary Poppins’ song ‘Supercalifragilisticexpialidocious’ with lyrics warning of the dangers of disinformation.

Meanwhile the work of the board was put on pause.

‘So this begs the question,’ write the senators, ‘if the (former) executive director of the DGB is incapable of determining what is and is not disinformation, how could the DGB ever have expected to function properly under her leadership?’

They say the documents show the department was working on plans to ‘operationalize’ its relationships with private social media platforms to implement its goals.’

‘According to whistleblower, Nina Jankowicz may have been hired because of her relationship with executives at Twitter,’ they write, pointing out that briefing notes suggest she knew two senior figures at the social media company.

‘Collectively, whistleblower and co-documents we’ve reviewed raise concerns that DHS could be seeking an active role in ordinating the censorship of viewpoints that it determines, according to an unknown standard, to be “MDM” by enlisting the help of social media companies and big tech,’ they write.

Twitter has become a hate figure for many Republicans and Trump allies, for the way it banned the former president last year and the way it has blocked accounts that for inappropriate content – ​​from violent threats to COVID-19 vaccine misinformation.

But the senators say spreading false ideas is not grounds for removal.

‘The First Amendment of the Constitution was designed precisely so that the government could not censor opposing viewpoints – even if those viewpoints were false,’ they write.

‘DHS should not in any way seek to enlist the private sector to curb or silence opposing viewpoints.’

June 2016 – Shared a linked to a now-deleted Medium post featuring a mural of Donald Trump kissing Russian President Vladimir Putin. ‘Putin’s Russia is not a country that any American voter would seek to emulate. The United States should not elect a demagogue who intends to do exactly that,’ she wrote at the time.

July 2016 – Jankowicz linked to a Foer piece titled ‘Putin’s Puppet,’ and tweeted: ‘But do we want a president that has so many shady and cozy ties with Russia? no. So yeah, this piece is a must-read.’

– She also shared a link to a Clinton campaign article along with the comment’: ‘Trump’s bizarre relationship with Russia … Foreign policy matters.’

September 2016 – ‘Trump’s Kremlin ties don’t end at Manafort. This is serious people,’ she warned in a tweet.

November 1, 2016 – ‘Husband texted me ‘you have news to wake up to.’ Never thought it would be this. Confirms our worst fears about Trump. I am horrified, Jankowicz tweeted. Came in response to a tweet from Hillary Clinton’s campaign claiming Trump has a ‘secret server’ he uses to ‘communicate privately with a Putin-tied Russian bank called Alfa Bank.’

November 6, 2016 – Jankowicz said that ‘what started months ago as me making jokes about Donald Trump’s ‘bromance’ with Putin has actually become an existential threat to our country’.

December 2016 – Called Trump ‘Pinocchio’ in response to a Biden official writing ‘it is not at all far-fetched to ask whether Trump is indeed the ‘puppet’ Secretary Clinton mockingly named him.’

March 2017 – Months after Trump took office, Jankowicz tweeted ‘Preach’ in response to a screenshot from a Washington Post article titled ‘The Clinton campaign warned you about Russia. But nobody listened to us’ and written by Clinton campaign communication director Jennifer Palmieri.

June 2020 – Jankowicz directly cited Steele Dossier claims in her book How to Lose the Information War: Russia, Fake News, and the Future of Conflict

October 15, 2020 – Jankowicz told the Associated Press that there were questions about whether the infamous laptop belonged to Hunter Biden.

‘We should view it as a Trump campaign product,’ Jankowicz said at the time of the interview and pointed to involvement from former New York Mayor Rudy Giuliani and Trump associate Steve Bannon.