Ministers today refused to make a last-gasp intervention that could avert a massive strike due to cripple the UK’s train network tomorrow.

On the eve of the most widespread shutdown of the railways in three decades, Treasury chief secretary Simon Clarke ruled out direct government involvement in talks between operators and the RMT today.

Millions of people will be forced to work from home or battle into work on foot, bike or in rammed buses due to the three days of strikes that run tomorrow, Thursday and Saturday. The strike has been designed so there will also be severe disruption for on non-strike days too, causing six days of chaos.

But Mr Clarke refused entreaties for ministers to play a larger role in averting the crisis, saying they would only ‘confuse things’.

His remarks prompted claims from Labor that ministers are deliberately trying to ‘hobble’ any attempt to stop the strike, for political reasons.

The rail strikes will also directly affect pupils, who are taking their GCSEs and A-levels this week, which rely on trains to get them to school. The walkouts will also cause misery for music and sports fans, especially the 200,000 people heading to the Glastonbury Festival after a three-year hiatus.

And today it emerged that teachers, doctors, binmen, barristers and postmen could join rail workers in heaping walkout misery upon Britain this Summer and into the Autumn. 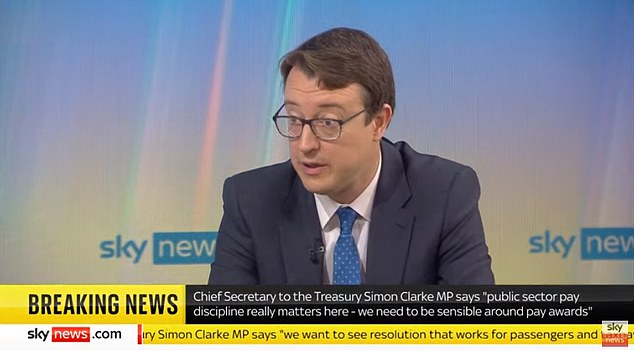 On the eve of the most widespread shutdown of the railways in three decades, Treasury chief secretary Simon Clarke ruled out direct government involvement in talks between operators and the RMT today. 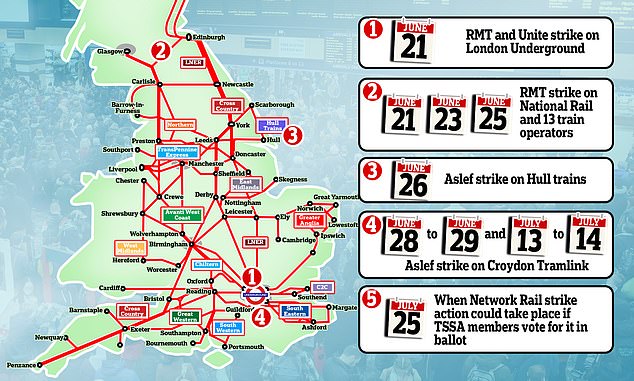 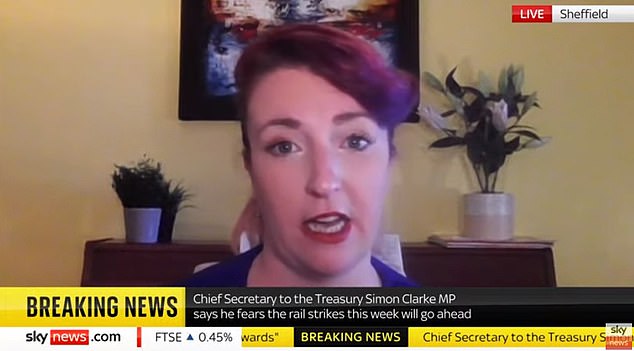 Shadow transport secretary Louise Haigh accused the Government of ‘wanting the strikes to go ahead, telling Grant Shapps to ‘grow up’ and stop ‘throwing muck’. 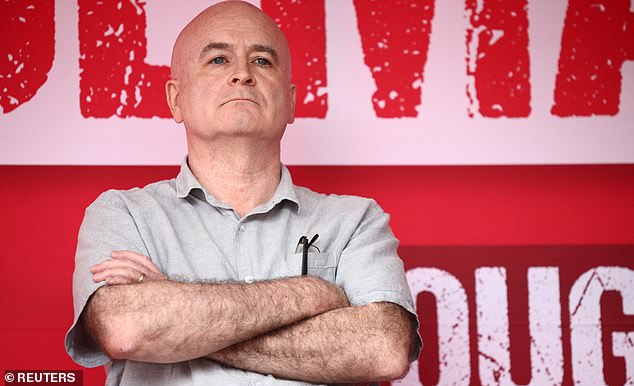 Mick Lynch, Secretary-General of the National Union of Rail, Maritime and Transport Workers speaks at a trades union organized protest march opposed to British government policies at Parliament Square in London on Saturday

The Bank of England last week forecast inflation was set to hit 11 per cent in the autumn as it hiked interest rates to 1.25% – the fifth successive rise.

He told the programme: ‘In the current landscape of inflation at 9 per cent bordering 10 per cent, it is not a sustainable expectation that inflation can be matched in payoff…

‘We cannot get into a world where we are chasing inflation expectations in that way because that is the surest way I can think of to bake in a repeat of the 1970s, which this Government is determined to prevent.’

Asked if the Government should be part of the talks because of its role in setting the negotiating mandate, he told BBC Radio 4’s Today programme: ‘Ultimately, it will only confuse things if we add a third party to these negotiations.

‘The train operating companies and Network Rail are working to deliver a sensible program of reform and a sensible and fair share deal with the trade unions.’

He added: ‘The practices that are in place across the network are out with the ark, frankly, and need to be reformed.

‘It cannot be the case that we have put in £16 billion during the pandemic as taxpayers, worth £600 per household, and still have a railway system where some of what goes on occurs and where, frankly, fares are higher than they need to be and efficiency is lower than it should be because of the way the trade unions operate.’

He also lashed out at public sector workers demanding pay rises inline with, or high than, inflation, which is set to hit 11 per cent this year.

‘The Government is trying in good faith to manage what is a very difficult balancing act between making sure that people get the share awards they they deserve … this has to be set against the wider responsibility I have, the Government has, to the public finances to make sure they are sustainable,’ he told Sky News.

The Transport Secretary called on the Labor leader to issue a last-minute appeal for the unions to reopen their negotiations with bosses.

Sir Keir stopped short of denouncing the action yesterday, merely repeating his line that the ‘strikes should not go ahead’.

In a letter to the opposition leader, Mr Shapps wrote: ‘This week, the RMT union will inflict huge disruption on families and businesses with the biggest rail strikes in Britain since 1989.

‘These strikes will hit millions of families in the pocket. They will harm the economy and damage businesses. They will disrupt operations on the NHS and jeopardise GCSE and A-level exams.

‘The public will not forgive the Labor Party for siding with those who are attempting to bring our country to a standstill.

‘It’s time for Labor to stop backing these strikes, and urge your union paymasters to talk, not walk.’

But today, shadow transport secretary Louise Haigh accused the Government of ‘wanting the strikes to go ahead, telling Mr Shapps to ‘grow up’ and stop ‘throwing muck’.

‘At the moment, without the Government there the negotiations are a sham,’ she told the BBC.

‘Without them there, it’s impossible for them to find a way forward and, therefore, it is inevitable that industrial action will happen.’

Challenged that the Government is not a party in the negotiations, Ms Haigh said: ‘The Department of Transport are a party because they set the negotiating mandate for the train operating companies and they have so far refused to do that, so not only are they boycotting the talks, they’re actually hobbling them and therefore that’s why it is imperative that they step in.’ 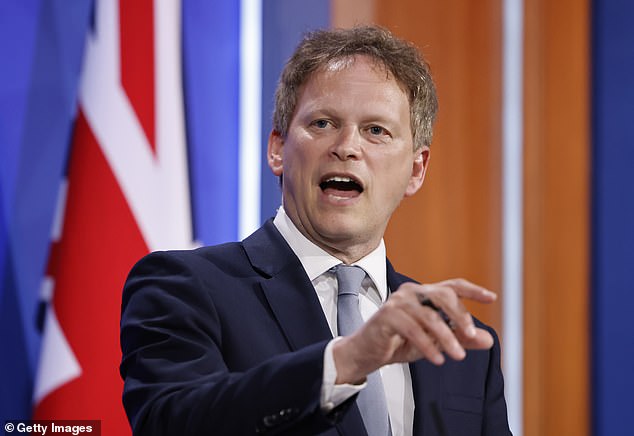 The Transport Secretary, pictured, highlighted revelations in The Mail on Sunday about how Sir Keir had effectively backed the strikes by opposing attempts to block them 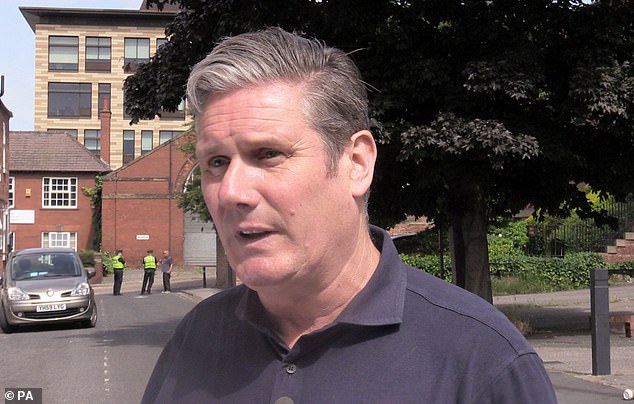 Labor leader Sir Keir stopped short of denouncing the action yesterday, merely repeating his line that the ‘strikes should not go ahead’

John Leach, assistant general secretary of the RMT said workers are ‘determined’ to get ‘justice for themselves’.

Asked on BBC Radio 4’s Today program whether transport workers will stick with the negotiations if it becomes a ‘war of attrition’, Mr Leach said the workers in his union have ‘grit and determination’.

He said: ‘The men and women in my union who keep Britain moving across the entire railway network are some of the most determined, professional, dedicated people you’ll ever meet.

‘They kept this country moving through the pandemic, they keep the railways moving every single day and it’s that kind of grit and determination that’s going to mean that they will stick with this negotiation and justice for themselves in that regard, right through to the end .

‘That’s why we’re so clear about this. We didn’t want to be in this situation – that has to be said – but we are determined to see this through.’

He also said the union would like more support from the Labor Party and that the Government are ‘abjectly failing’ in their responsibilities.