New TOWIE star Pia Smith has revealed ‘half the show’s cast’ were booted off a plane to Madrid for refusing to wear masks.

The stars of the ITVBe show had been filming for the new series in the Dominican Republic – but nine cast members were removed from the plane after landing in the Spanish city on Tuesday at 11.25am- with the group spoken to by Spanish police over their ‘ lunatic behaviour’.

The group – five women and four men – failed to comply with airline rules by refusing to wear masks, despite repeated warnings, with one star vaping on the plane.

Three of the show’s new stars Pia, Hannah Voyan and Mia Sully were among these removed. 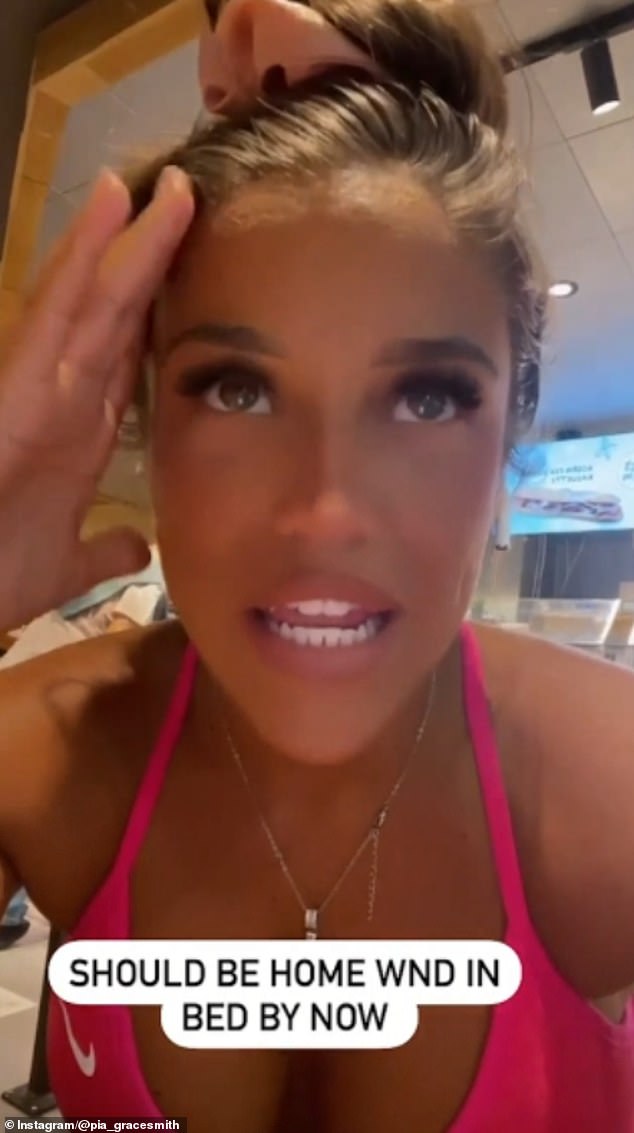 Removed: New TOWIE star Pia Smith has revealed ‘half the show’s cast’ were booted off a plane to London for refusing to wear masks

After being met by police, the cast members were then refused permission to board their flight to London.

Pia said on Instagram: ’24 hours later, we’re still traveling, we got chucked off the flight because we didn’t wear masks, it was like half the cast that got chucked off. 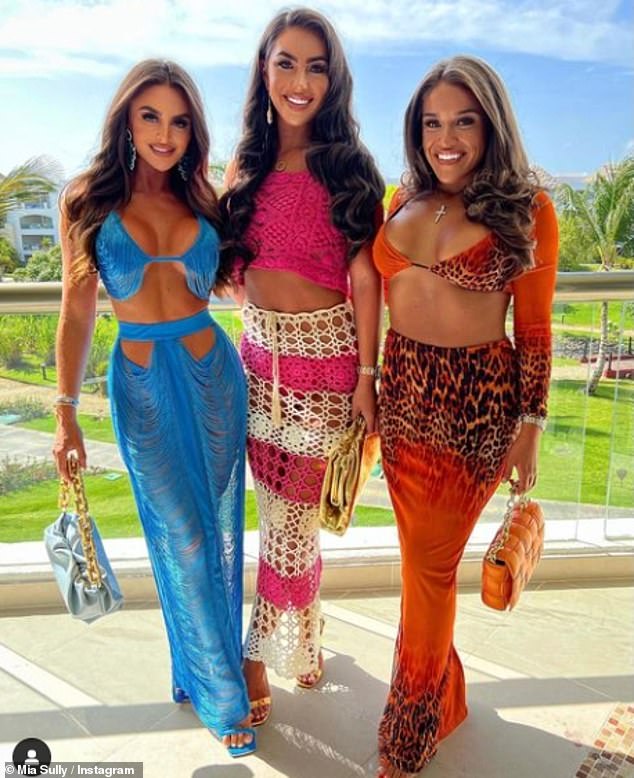 Awkward: Three new stars Pia (right), Hannah Voyan (centre) and Mia Sully (left) were removed from the flight, which arrived into Madrid from the Dominican Republic after filming at 11.25am on Tuesday

A source told The Sun of the star seen vaping on the plane: ‘Fumes were visible above their seats. They were asked to stop but refused. It was appalling behavior. Absolutely idiotic.’

The airline rules state that any electric cigarettes must be kept in hand luggage rather than in the hold as they pose a fire risk, and that they must not be used on board at any time.

The use of masks covering the nose and mouth on Air Europa planes is currently mandatory for those over the age of six.

A source added: ‘This lunatic behavior brings shame on ITV and the entire TOWIE show. They were refusing to adhere to safety and security rules, and giving it the “big one”. 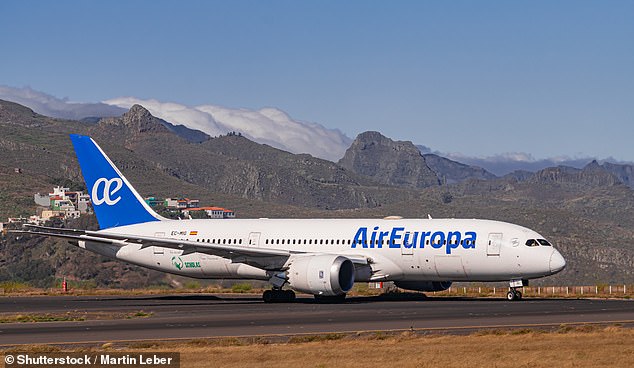 Authorities: The Air Europa aircraft was met by police, with the stars reportedly spoken to by police over their ‘lunatic behavior’ 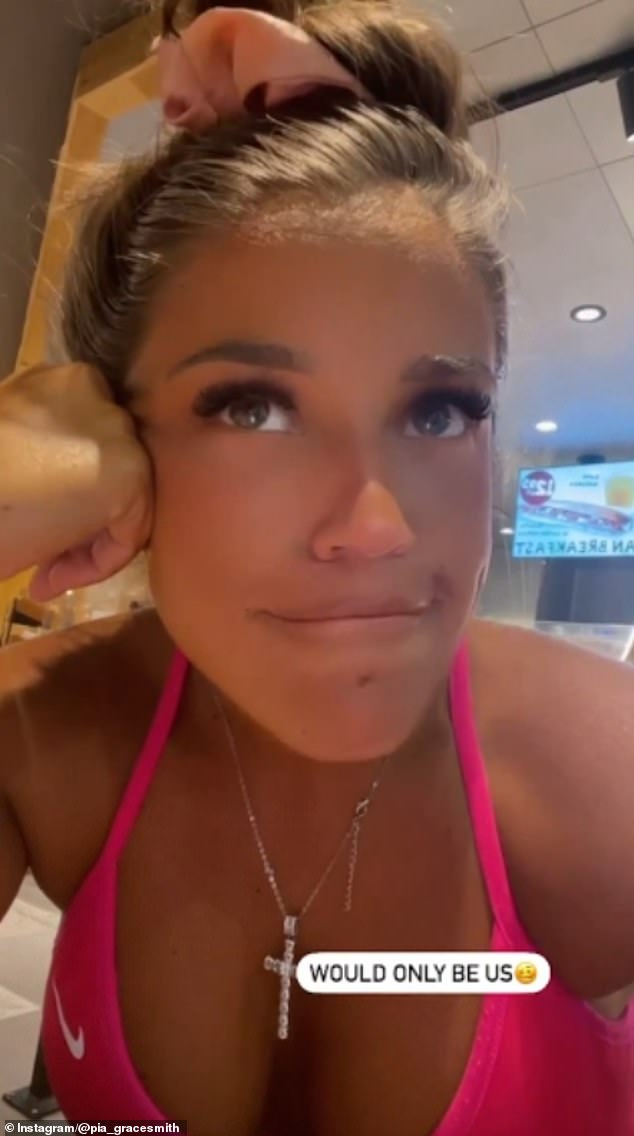 Pia said on Instagram: ’24 hours later, we’re still traveling, we got chucked off the flight because we didn’t wear masks, it was like half the cast that got chucked off 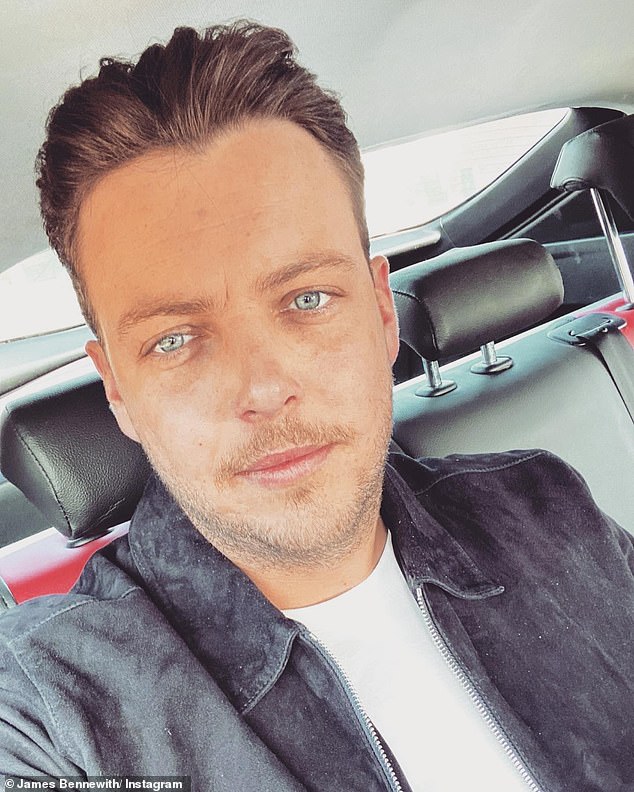 Star: James ‘Diags’ Bennewith is among the stars said to have been removed from the plane

‘They now face a struggle to return to the UK – and can expect short shrift from ITV bosses when they do get home.’

The show stars now face a hefty fine for their in-flight conduct.

A spokesman for Spain’s Civil Guard told MailOnline: ‘At 2.55pm today the captain of the police requested our presence on board a plane at Madrid’s Barajas Airport which had touched down from the Dominican Republic to deal with people we were told were causing a public order disturbance

‘Civil Guard officers found these people a little upset when they reached the aircraft.

‘On the indications of the captain and to avoid any more problems nine people, consisting of four men and five women who are all British nationals, were removed from the plane and after the corresponding complaint from the captain they are now set to face a fine .

‘While officers were carrying out the process of identifying all the people that were removed from the plane so they can be notified of the amount of the fines at a future date, they’ve ended up missing their onward flight.

‘Police are accompanying them to another flight bound for the UK so they can leave Madrid tonight.

‘No arrests were made and after being accompanied off the earlier flight, the nine people removed were very co-operative.’

A well-placed police source added to the MailOnline: ‘There was vaping going on and they weren’t wearing face masks as they were obliged to do and they were disobeying instructions from the flight crew.

‘As well as the nine people removed from the airplane, someone from the program who wasn’t involved in any of the problems stayed on with them and was also due to travel back to the UK with them on a different plane to the rest of the group.’

The Civil Guard added that the cast members had been reported for allegedly breaching Spanish air safety law – Law 21/2003.

A police report is expected to be passed to AESA – Spanish Aviation Safety and Security Agency – before a fine is decided. 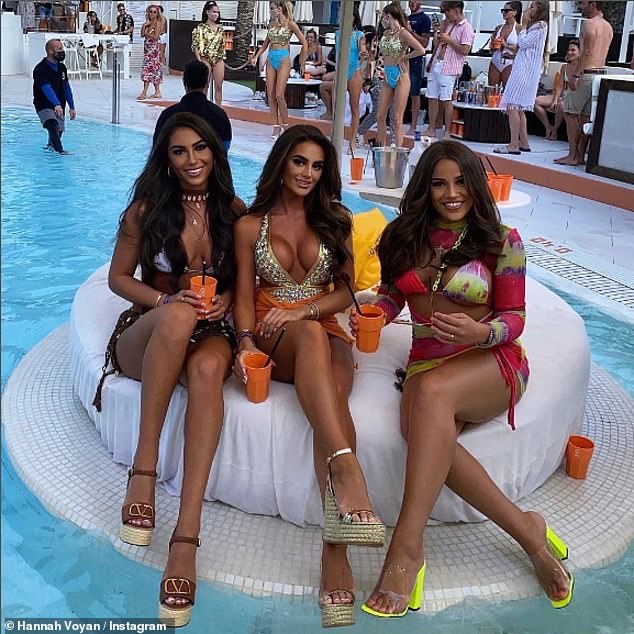 Exciting: Hannah, Pia and Mia will star in the forthcoming series, which is set to air later this year

‘So excited for our new chapter’: The trio, who often share glimpses of their glamorous lifestyles on social media, took to Instagram on Sunday to share the exciting news

A formal complaint from the captain of the Air Europa flight is expected to be included.

An Air Europa spokeswoman confirmed the incident to The Sun: ‘There was an incident on the flight.

‘Following protocol, several passengers were asked to leave the plane for refusing to wear the mandatory masks and one of them for smoking inside the aircraft.

‘While leaving the plane, they were accompanied by other passengers without further incident. 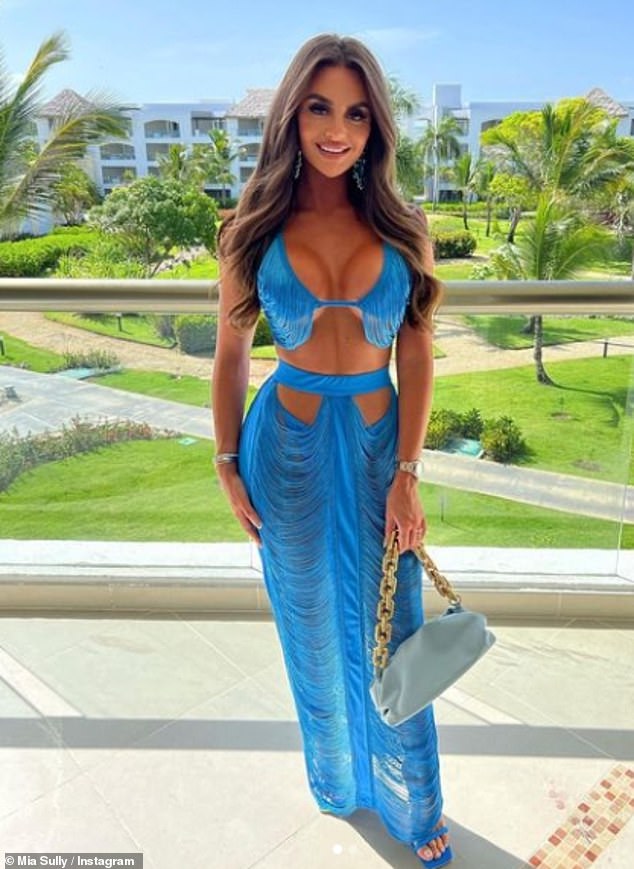 Condition: According to The Sun, Mia only wanted to parttake in the show if she could do so alongside her friends

MailOnline has also contacted representatives for Lime Pictures, each of the named stars, and Air Europa for comment.

When a Polish man was filmed leaving a Ryanair plane at Malaga Airport in January 2018 after climbing onto the wing via an emergency door, he was warned he could be fined £40,000. It is not clear if he had been hit with the huge financial penalty.

In August 2016 a Bolivian-born Spanish immigrant made headlines around the world after being filmed sprinting across a runway at Madrid’s Barajas Airport to catch his flight, mistakenly thinking he was just about to miss it.

Fast food worker Cesar Saucedo, 24, protagonised an incredible security breach by jumping off a disconnected jet bridge at the airport and dashing towards a plane preparing to take off.

He managed to make his flight to the holiday island of Gran Canaria but was intercepted by police when he reached his destination.

Local reports at the time said Cesar could be fined anything up to £38,000 but it is not known if was ever asked to pay up the huge amount

New stars Pia and Hannah joined their best friend and Absolutely Ascot star Mia on the show for the new series.

Alongside a sizzling snap of the girls in the Dominican Republic, where the Essex-based show is filming special episodes, Mia penned: ‘Brunette Trio [sic] So happy to be working with my 2 best friends that are more like sisters. 17years of friendship, we’ve done everything together and so much more to come!

‘Love you both to the moon and back. So excited for our new chapter [sic]’. 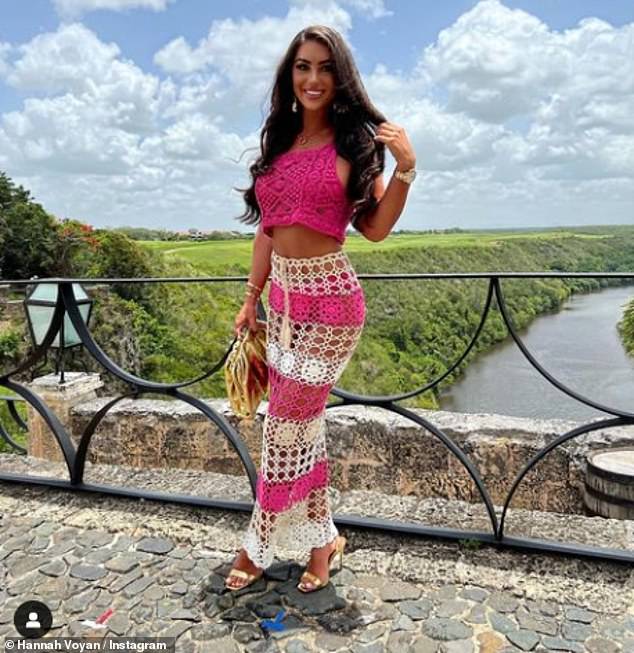 ‘First day of filming’: Hannah is the CEO of Millionaire Medical – a business which provides dermal fillers and BTX injections

According to The Sun, Mia only wanted to parttake in the show if she could do so alongside her friends.

The source explained: ‘As soon as bosses met all three of them, they knew they were onto a winner.

‘They are a force to be reckoned with and will bring so much drama to the new series. They know some of the cast already and there is beef between some of them, so expect some explosive telly.’

It has been said that the original plan was for the newbies to join the cast after the episodes abroad had been filmed, but that has now changed.

On Sunday afternoon, Hannah, who is the CEO of Millionaire Medical – a business which provides dermal fillers and BTX injections – updated her over 10,000 followers of her venture.

Pia, who owns a similar business to Hannah, Plumped By Pia, also took to the photo-sharing site with a gorgeous snap and wrote: ‘The secret is finally out.. you’ll be seeing some new faces on @towie [sic]’.

The insider added to The Sun: ‘It was a no-brainer to get the girls out in the sunshine and make a big impact on the opening episodes of the new series. Sparks are already flying and it will be great TV.’ 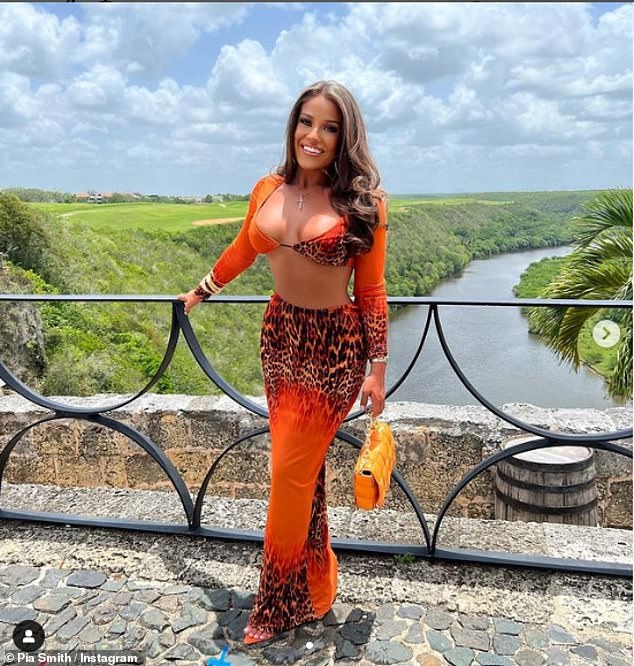