Millions of homeowners face mortgage misery after interest rates jumped for the fifth month in a row to a 13-year high of 1.25 per cent, which is this is the fastest that rates have risen over a six-month period since 1988.

Borrowers with variable-rate deals will see their bills soar by hundreds of pounds a year almost immediately.

Barclays, First Direct, HSBC and Virgin Money were among the first to reveal their variable – or tracker – rates would rise straight away. Santander is raising its rates from July and Nationwide from August.

The rise by HSBC yesterday was 0.5 per cent – ​​double the increase by some of its rival lenders on the same day, and also twice the size of the Bank of England’s 0.25 per cent interest rate increase.

Around two million homeowners have a variable-rate mortgage that moves up or down in line with the Bank’s base rate.

Someone with a £150,000 loan on their lender’s average standard variable rate will have to pay an extra £21 a month – or £252 a year, according to mortgage broker L&C. 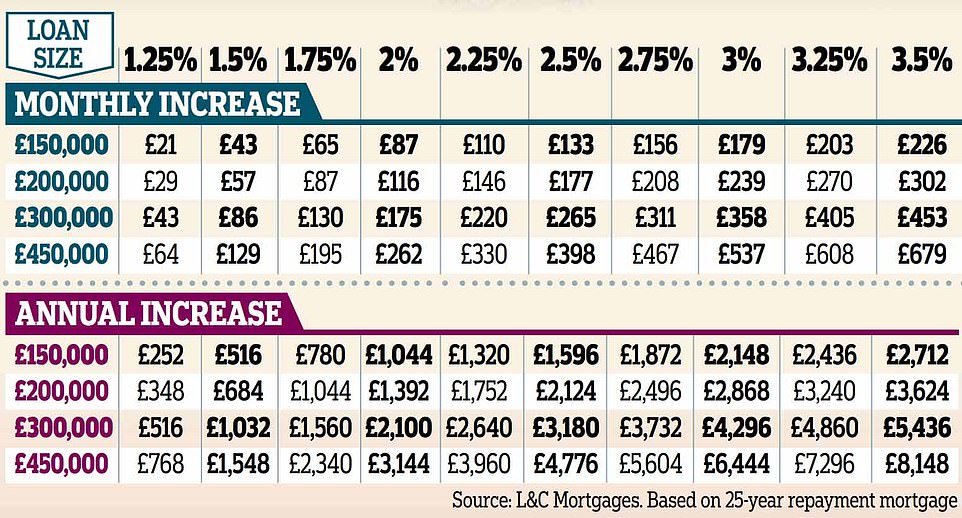 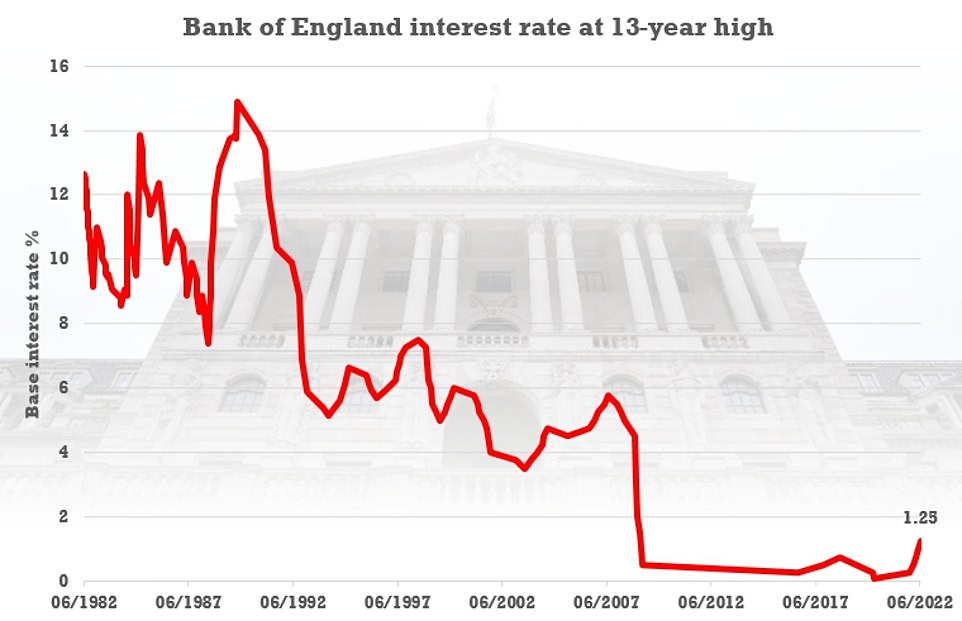 The Bank of England increased interest rates for a record fifth time in a row to a 13-year high of 1.25 per cent yesterday

Hundreds of thousands of homes could have insulation paid for by the Government before winter to protect families from the rising cost of living.

Ministers want to move £1billion away from existing energy saving measures to fund the plan – known as the Great British Insulation Scheme. No decisions have been confirmed but a government official said that No10 was looking at new ways to make homes cheaper to heat.

Cash could be diverted from either the Public Sector Decarbonisation Scheme or the Boiler Upgrade Scheme, The Times reported. Under the insulation plans the Government will top up the Energy Company Obligation, a fund for poorer households levied from energy bills.

The scheme, which has paid for more than 3.5million improvements in 2.4million properties since 2013, could now be expanded.

Chris Skidmore, the Tory MP for Kingswood and founder of the Net Zero Support Group, said that investment that would permanently bring down energy bills was the right approach.

Craig Mackinlay, a Tory MP and chairman of the Net Zero Scrutiny Group, said: ‘I am pleased that the Government will focus on insulation to reduce domestic energy use and cost … If the money is diverted away from nonsensical greenwash projects that don’t work I’ll be even more pleased.’

A government spokesman said: ‘We’re investing £6.6billion in total this parliament to improve the energy efficiency of homes and buildings … benefiting tens of thousands of homes and delivering savings of £300 a year on average on their energy bills.’

Experts also warn that interest rates could hit 3.5 per cent by the end of next year, piling yet more pressure on households already struggling to cope with the rising cost of living.

As lenders frantically pull their cheapest offers, the interest rate rise is also a major blow for 1.3million borrowers with fixed deals due to end this year.

For many borrowers, it will be the first time they have seen their monthly repayments increase when they come to remortgage.

Andrew Hagger, personal finance expert at Moneycomms.co.uk, said: ‘The latest hike in mortgage payments will be a hammer blow to households who are facing a tsunami of increased costs for essential goods and services.’

Fixed-rate deals for new customers are also becoming far dearer. The lowest two-year rates from the top ten lenders have trebled on average since October last year, according to L&C.

The average cheapest is 2.71 per cent, compared with 0.89 per cent nine months ago.

David Hollingworth, L&C associate director, said: ‘The rate at which mortgage rates have been moving has been astonishing. Many lenders have continued to make changes week in, week out, making it difficult for borrowers to keep tabs.

‘If fixed rates continue to climb, they could push through the 4 per cent barrier before the end of the year.’

‘Someone who locked into record low mortgage rates in recent years would face a real shock if they came to refinance that debt today.’

It is also feared that rising rates could create more mortgage prisoners – those trapped in expensive deals and unable to switch – because many banks are factoring in soaring living costs when assessing how much homeowners can borrow.

Experts also warned that renters will feel the pain as many landlords start passing on higher loan costs.

Sarah Coles, senior personal finance analyst at Hargreaves Lansdown, said: ‘If you are on a variable rate you might want to fix sooner rather than later. The longer you leave it, the more you’ll pay’. 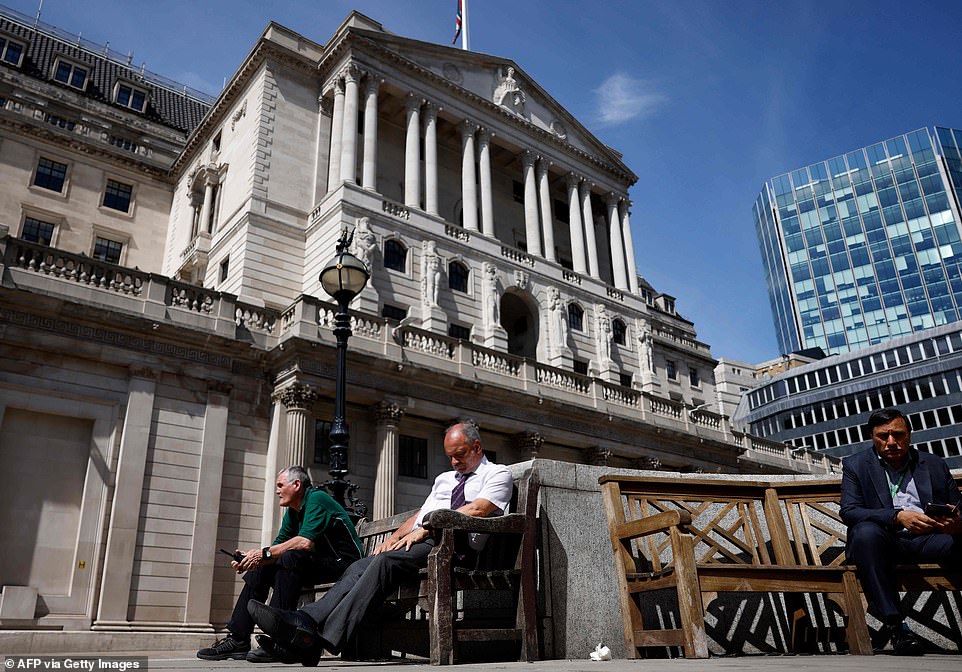 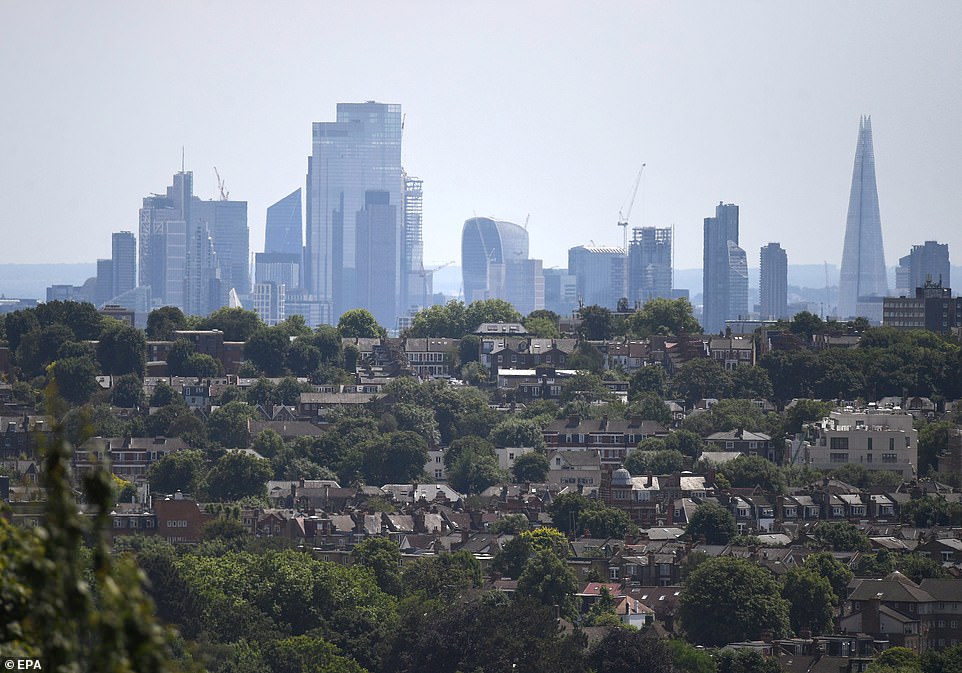 Residential houses are seen in front of the City of London skyline yesterday after interest rates rose from 1% to 1.25%

There is a glimmer of hope for savers. But there are still no deals that come close to matching the 9 per cent inflation rate, which means savers’ cash will continue to be eroded in real terms.

Many major banks are also still dragging their heels when it comes to passing on rate rises.

Rachel Springall, finance expert at data analysts Moneyfacts, said: ‘Out of the biggest high street brands, some have passed on just 0.09 per cent since December.’

The contrast could not be greater. Faced with the prospect of rampant inflation becoming embedded in the US economy, this week America’s central bank slammed on the brakes.

With inflation soaring to a 40-year high, the Federal Reserve raised interest rates by three-quarters of a percentage point to up to 1.75 per cent: The biggest hike since 1994.

Here in Britain, however, the Bank of England has been worryingly timid. Even though peak inflation here is now forecast to reach 11 per cent this autumn, yesterday the Old Lady of Threadneedle Street moved interest rates up by just a quarter of a percentage point – to 1.25 per cent.

Yes, this is the highest rate we have seen since 2009.

But, by failing to signal the inflation peril to consumers and businesses, the governor of the Bank, Andrew Bailey, and his colleagues on the Monetary Policy Committee risk two things: Fixing high inflation in the economy and an outbreak of ‘greedflation’.

This is when suppliers of goods and services – from petroleum forecourts to food producers – use inflation as an excuse to raise prices more than they need to.

Bailey and the Bank have repeatedly been wrong on inflation, constantly having to raise projections.

When the furlough scheme ended last autumn, the Bank was so worried about a jump in unemployment, it neglected its main duty: To hold inflation to a 2 per cent annual target.

Any boss of a private sector organization who missed targets so spectacularly would be out on their ear.

To their credit, three distinguished economists on the rate-setting committee did see the risk of uncontrolled inflation and voted decisively yesterday for a 0.5 per cent rise.

But it was not enough.

As the cost of living has surged, Chancellor Rishi Sunak has pumped an extra £37billion into the economy this year to help people meet their energy bills.

This should have given the Bank the headroom to raise interest rates without hammering national output.

Now the risk – especially given how restive the trade unions are becoming – is that pay chases inflation. This could create a 1970s-style ‘wage price spiral’ that would only worsen the problem. Inflation so stitched into the economy could take years to dissipate.

The Bank should have been bolder, sending a powerful message of restraint to households, employees and business.

This is a badly missed opportunity – and a serious miscalculation.

VICTORIA BISCHOFF: Only crumb of comfort is that hike wasn’t higher

Households up and down the country are wondering how much more bad news their battered budgets can take. The soaring cost of living means many are already struggling to make ends meet – and that’s before the average annual energy bill rises to a predicted £3,000.

So news that mortgage bills – the biggest monthly expense for most people – are also set to rocket will be a terrifying prospect. About two million homeowners with variable rate loans will see an almost immediate jump in their monthly repayments after yesterday’s interest rate increase.

But the real shock will come for those who locked into ultra-cheap fixed deals a few years ago that are soon due to end. And this will be a bitter blow for anyone who stretched themselves to buy a bigger house or who has borrowed extra to make home improvements. Some could well find that the bumper mortgage they could scarcely manage before is simply unaffordable at the rates available.

There is also a risk that, as lenders rethink how much homeowners can afford to borrow in light of rising bills, some could just be refused a new deal. This would force borrowers to roll on their provider’s standard variable rate, which is even more expensive.

And this is just the beginning, with interest rates now predicted to reach as high as 3 per cent or even 3.5 per cent by the end of next year.

It doesn’t matter that home loan rates remain cheap by historical standards.Against a backdrop of rising broadband, council tax, energy, food, phone, oil and water bills, any rise in mortgage costs will feel like a hammer blow. So while there has understandably been much criticism of the Bank of England’s decision not to raise the base rate faster to tame spiralling inflation, from the homeowners’ point of view, rising rates are worrying enough without a sudden, sharp hike.

Debt charities have already reported a surge in demand from frantic families forced to ration meals and heating.

Back-to-back interest rate rises are only going to intensify the squeeze on household finances. And it can’t be a coincidence that the City watchdog chose yesterday to reveal it had written to more than 3,500 lenders to remind them of their duty to support customers struggling with repayments.

The silver lining is that there is still time for homeowners (who meet their lenders’ stricter affordability rules) to protect themselves against future rate rises. Yes, the record low deals of the past few years are long gone. But there are still good value fixed-rate offers available – and borrowers can reserve one up to six months in advance. They just need to move fast.