Manchester or Glasgow could be chosen as the next hosts of the Eurovision Song Contest after the organizers announced next year’s show will not be held in war-torn Ukraine over safety fears.

The European Broadcasting Union (EBU), which organizes the event, said it had been in discussions with the Ukrainian public broadcaster UA:PBC over how it would hold the event after its entry Kalush Orchestra won this year’s edition.

Traditionally the winner of the international singing contest hosts the next year’s edition, with Italy holding it in May after coming out on top in 2021.

However, the EBU said that after looking into the issues of safety in the country, which is currently at war with Russia following Vladimir Putin’s invasion in February, there is no possibility of it being held there.

Instead, the EBU said it will discuss with the BBC whether it will host the event in Britain, after the UK’s Sam Ryder finished as runner-up.

The BBC said it would ‘of course’ discuss hosting the international event with the organizers, and if it does, it would be the first time the runner-up has held it.

This has sparked rumours that Manchester or Glasgow could host the event, with Scotland’s First Minister Nicola Sturgeon nailing her colors to the mast early, tweeting: ‘I can think of a perfect venue on banks of the River Clyde!’

However, as the BBC will host the event, it could take place closer to its base in MediaCityUK in Manchester, with one source telling MailOnline: ‘There is an arena suspiciously available in Glasgow for May, and Manchester is very handy for the BBC. ‘

The public broadcaster of the host nation is expected to contribute between £8.5m and £17m to the show, while the EBU itself, which is funded by member broadcasters, will contribute £5m in total.

The host city is also expected to contribute financially or ‘in kind’ by covering expenses for security, branding and side events. 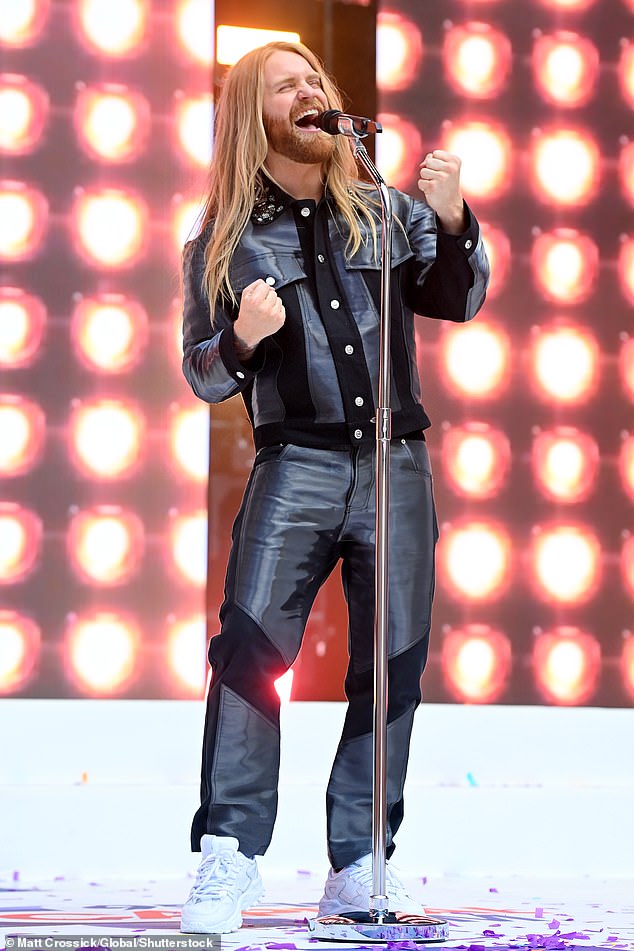 Ukraine’s Kalush Orchestra (pictured) won the event in Turin, Italy, in May with their song ‘Stefania’

The bombshell announcement was made by the EBU this morning, giving rise the possibility of the UK hosting the event for the first time since 1998, when it was held in Birmingham following Katrina and the Waves’ victory with ‘Love Shine a Light’.

This morning’s EBU statement said: ‘Following their win at the Eurovision Song Contest (ESC) in May the EBU has been exploring options for the hosting of next year’s competition with Ukraine’s public broadcaster UA:PBC, who previously staged the event in 2017 and 2005 .

‘It has become a well-known tradition that the winner of the Eurovision Song Contest hosts the competition the following year, providing certain criteria including ensuring the viability of staging the event and the safety of all stakeholders, including the public, are met.

‘Given the ongoing war since the Russian invasion of this year’s winning country, the EBU has taken the time to conduct a full assessment and feasibility study with both UA:PBC and third-party specialists including on safety and security issues.

‘The Eurovision Song Contest is one of the most complex TV productions in the world with thousands working on, and attending, the event and 12 months of preparation time needed.

‘Following objective analysis, the Reference Group, the ESC’s governing board, has with deep regret concluded that, given the current circumstances, the security and operational guarantees required for a broadcaster to host, organized and produce the Eurovision Song Contest under the ESC Rules cannot be fulfilled by UA:PBC.

‘The EBU would like to thank UA:PBC for their wholehearted cooperation and commitment in exploring all scenarios in the weeks since Kalush Orchestra’s win on May 14 in Turin and share their sadness and disappointment that next year’s Contest cannot be held in Ukraine. 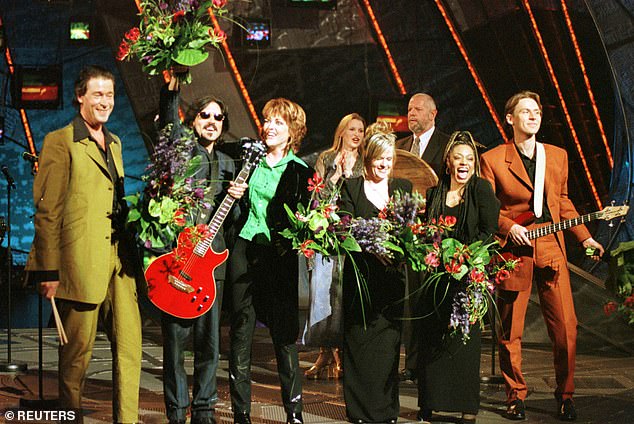 It will be the first time the UK hosts the event since Katrina and the Waves (pictured) won in 1997, allowing it be held in Birmingham a year later 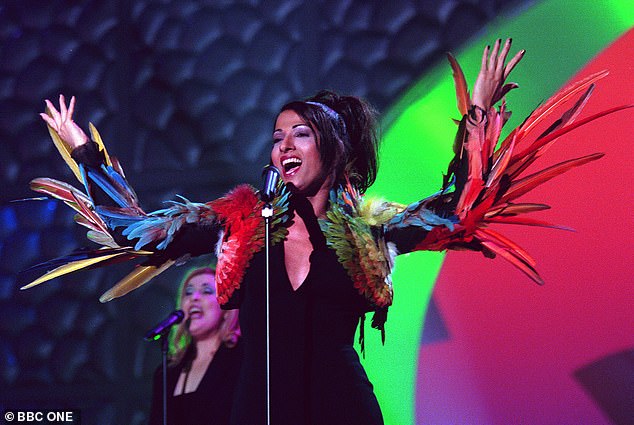 ‘The EBU has been supporting UA:PBC across a whole range of areas since the invasion. We will ensure this support continues so U:PBC can maintain the indispensable service they provide to Ukrainians

‘As a result of this decision, in accordance with the rules and to ensure the continuity of the event, the EBU will now begin discussions with the BBC, as this year’s runner up, to potentially host the 2023 Eurovision Song Contest in the United Kingdom .

‘It is our full intention that Ukraine’s win will be reflected in next year’s shows. This will be a priority for us in our discussions with the eventual hosts.’

In a statement, the BBC said: ‘We have seen the announcement from the EBU.

‘Clearly these aren’t a set of circumstances that anyone would want. Following their decision, we will of course discuss the BBC hosting the Eurovision Song Contest.’

Ukraine’s entry, Kalush Orchestra, surged to the top of the leaderboard this year, with an impressive 631 points.

They later auctioned the trophy they received for winning the event to raise money for the Ukrainian army, with the £700,000 raised being spent on buying combat drones.

While Ukraine won the contest for the third time since joining the contest in 2003, the UK saw its best result in decades.

Sam Ryder, from Essex, wowed the judges with his song ‘Space Man’ and finished second with 466 points, the best UK result since Imaani came second in 1998 with her song ‘Where Are You?’

The last time the UK won was in 1997 when rock band Katrina and the Waves performed ‘Love Shine a Light’.

The UK’s second place standing was thrown into doubt after the grand final when it emerged organizers had replaced six countries’ jury results with aggregate scores after noting ‘irregular voting patterns’.

But after an investigation, the EBU stuck by its decision and confirmed Ryder as runner-up. 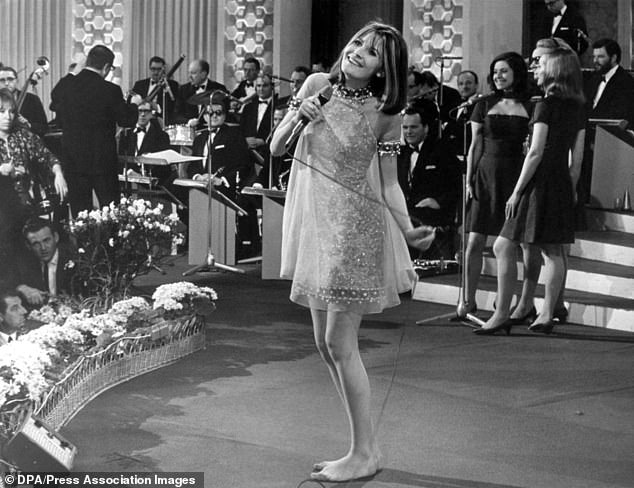 Sandie Shaw (pictured) was the first UK winner of the Eurovision Song Contest, coming out on top with her song ‘Puppet on a String’ in Vienna, Austria, 1967 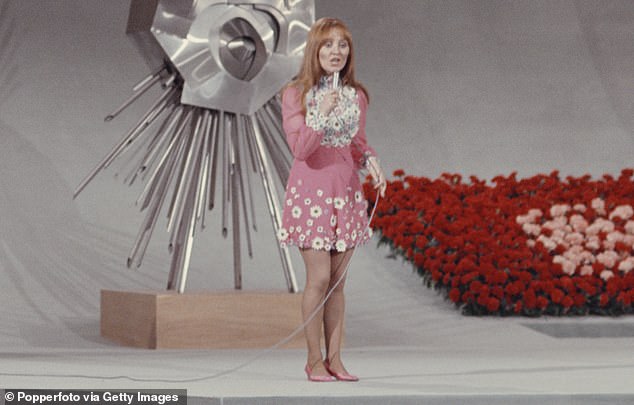 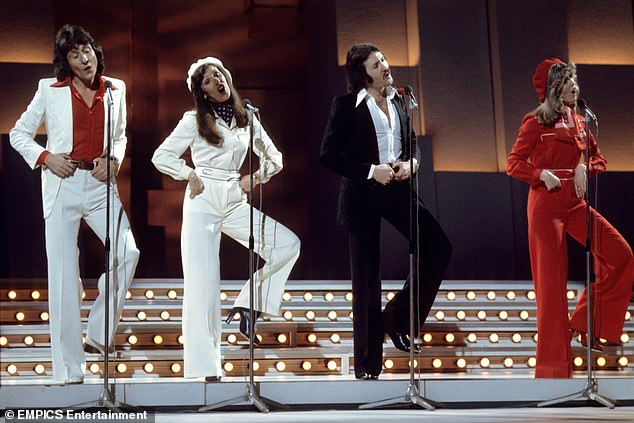 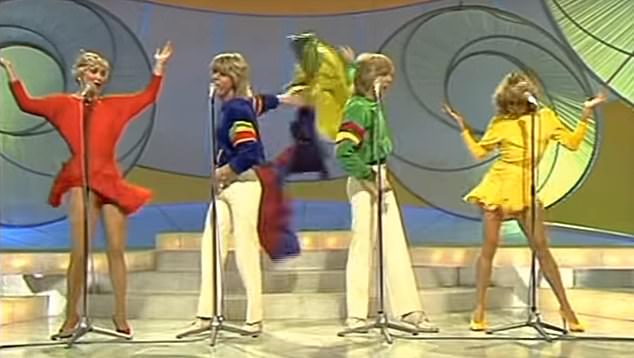 British pop group Bucks Fizz, which was formed specifically for the contest, also won the show in 1981 with their song ‘Making Your Mind Up’

Downing Street welcomed the possibility of the UK hosting Eurovision if Ukraine cannot, pledging to ensure it would ‘overwhelmingly reflects Ukraine’s rich culture, heritage and creativity’.

‘If the EBU decides the competition can’t go ahead in Ukraine we would of course welcome the opportunity to work closely with Ukraine and the BBC to host it here in the UK.

‘But we would be committed to ensuring it overwhelmingly reflects Ukraine’s rich culture, heritage and creativity, as well as building on the ongoing partnership between our two countries.’

Asked if the Government would help the BBC with the costs, the spokesman said ‘we’re getting slightly ahead of ourselves in terms of the process’.

She wrote: ‘We wish Eurovision could be in Ukraine but understand that in circumstances this isn’t possible. However, I can think of a perfect venue on banks of the River Clyde!! Scottish Government is happy to discuss with BBC, Glasgow City Council, European Broadcasting Union and others.’

She added: ‘Indeed there may be several possible venues in Scotland – let’s discuss!!’ 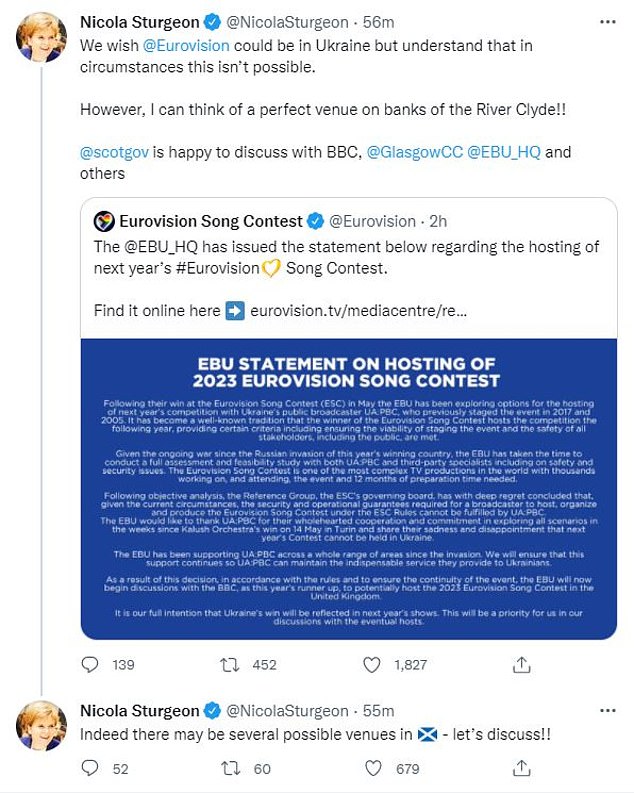 Among the venues that could host the event are the OVO Hydro arena in Glasgow, which is the largest entertainment venue in Scotland with a capacity of 14,300 and a clear schedule for next May.

The 20,000-capacity O2 Arena in London is another strong contender, with experience hosting large events, as is the OVO Wembley Arena, which can hold 12,500 people.

Other suggested host venues include Brighton, which hosted the show in 1974, and major cities such as Liverpool, Manchester or Newcastle.

It is unclear at this time how much it would cost to host the event – ​​Azerbaijan spent a reported £48m holding it in 2012.

It is not clear whether the BBC would have to pay for the contest from its current license fee allocation or would be given further money.

The UK already spends more on Eurovision than most participants.

It is part of the so-called big five alongside France, Germany, Italy and Spain, who each get a free pass through to the grand final because of their financial contributions.