Max, from Birmingham, told Kirstie Allsopp he wanted to move to the city to be with his boyfriend Dan. The prospective buyer had had no luck looking for a four-bed and kept being outbid by other buyers who were offering over asking price to secure the houses.

When they met, Kirstie gave Max a reality check and told him he would have a hard time finding the property he wanted within his price range.

The creative was looking to buy in the trendy areas of Headingley and Horforth, where the average for a four-bedroom house is around £400,000.

She still showed him three different properties, but Max struggled to find his match, saying one house was too small, another in the wrong location and one was by a busy road.

Viewers said Max’s head was ‘in the clouds’ and that he had unrealistic expectation as they followed his attempt at finding a home. 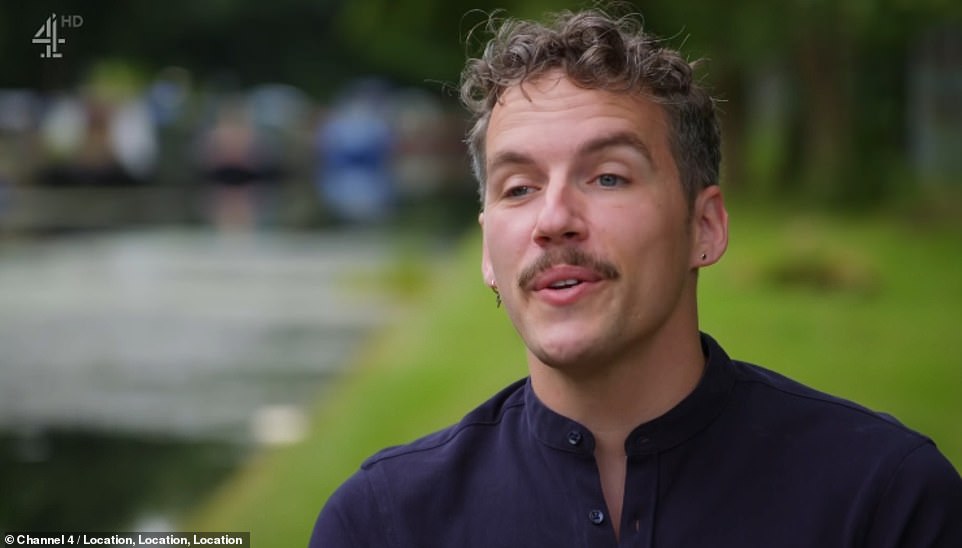 Max, from Birmingham, told Kirstie Allsopp he wanted to move to Leeds to be with his boyfriend Dan on last night’s episode of the property show and was looking for a four-bedroom house on a £245,000 budget

Max was aware he was asking for a lot on a small budget at the start of the show.

‘Four bedroom does sound like a bit of an extravagance for one person,’ he admitted. ‘But having an office room is really important, and having a room to do some sort of painting or some studio would be really, really, good,’ he added.

He went on with his list of requirements, going into more specifics.

‘High ceilling because I’m a giant of a human at 6ft6. I’d like a bedroom where I could have guests to stay in and a basement room with a separate entrance so I could rent out to help me with the mortgage,’ he said.

And the prospective buyer knew his demands would not male TV real estate agent Kirstie happy.

‘Kirstie is probably going to kick me for wanting so much for 250,000 but that’d kind of her problem now, isn’t it,’ he joked.

And Kirstie agreed she had to ‘wipe away tears’ after looking at Max’s demands, and said his request for ‘four bedrooms [rang] the most alarm bells.’ 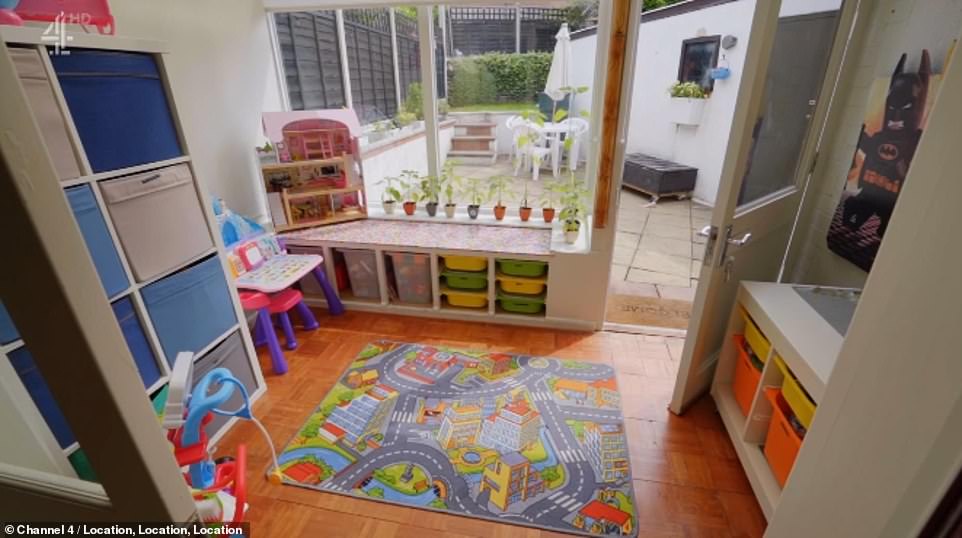 Good size but not sold on the location! The second house Max visited was priced at £230,000 and was located in Bramley. While it offered plenty of space, but didn’t give him ‘the feels’ 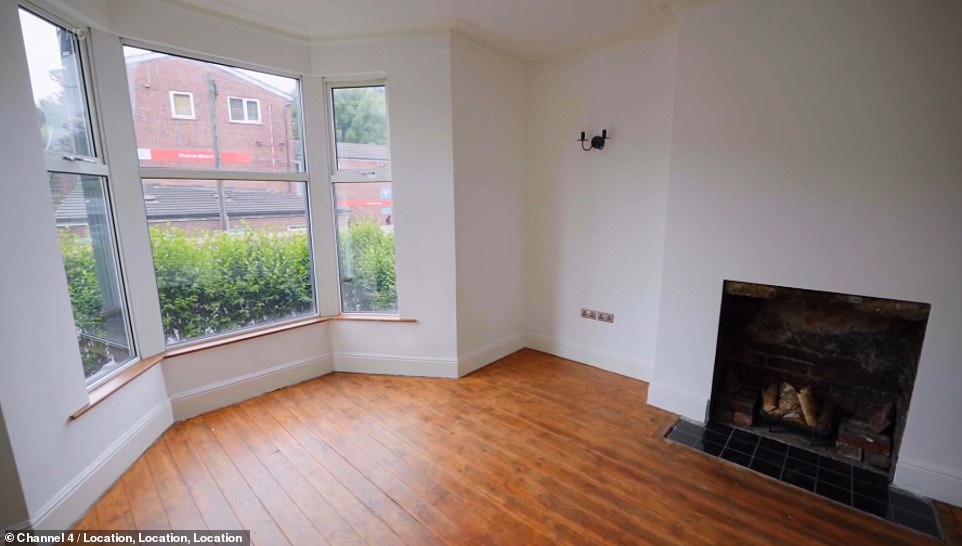 Perfect inside, but busy road outside! The third house, also located in Bramley, came to the market for £235,000 and was completely refurbished, but it was next to a very busy road 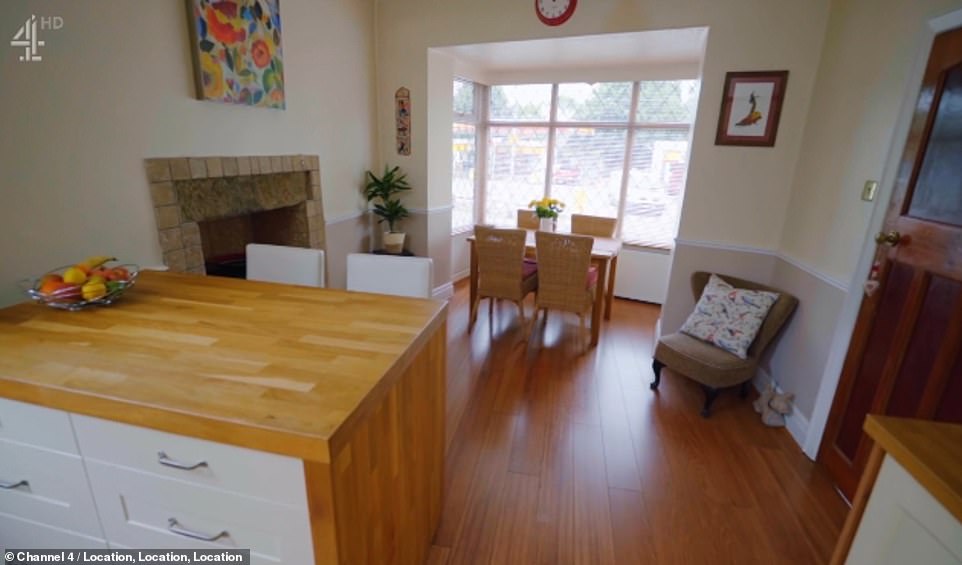 Sought-after area but small square footage The first home was £20,000 under Max’s budget, and was located in a sought-after area, but only counted two bedrooms instead of four 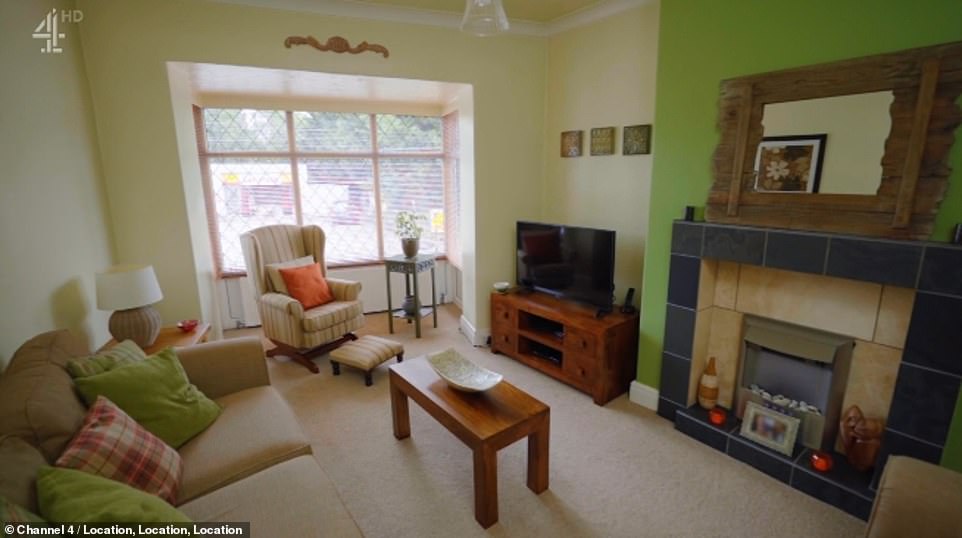 Too small for Max, but within his budget! Max believed the first house was too small to suit his needs, and realized it would be a struggle to find a four-bedroom house on his budget

However, the estate agent began searching for Max, coming up with three different options to choose from.

However, it was opposite a petrol station by a busy road, and only had two rooms, going for £225,000.

The property had potential to be expanded with a loft conversion that could be turned into a rental, however, it would be a pricy project to execute. 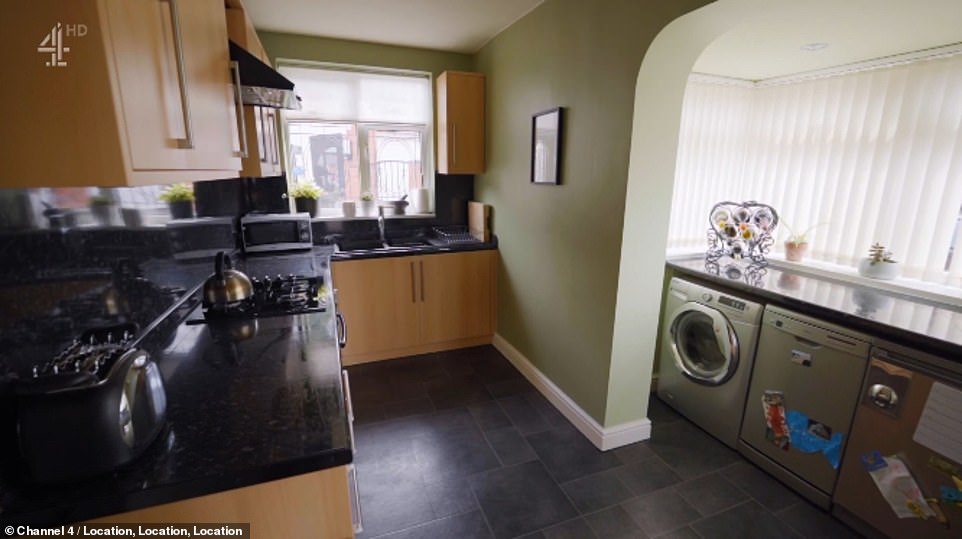 potential to expand but not sure on the location. The second house came with a large kitchen that could be extended by knocking down the wall and turning the kitchen and dining room into an open plan living space 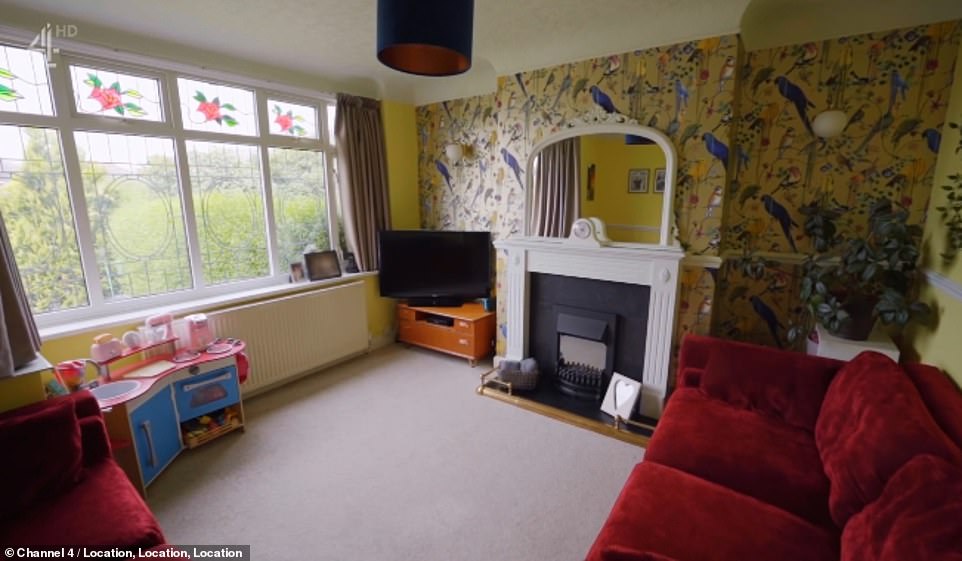 Good size, good price, but not good location! The second home was a 1930s house with features of origins and offered plenty of space, including three bedrooms that could be turned into a four bed with planning permission

Max was not sold on the idea, and Kirstie revealed the house ‘illustrate the struggle with Max’s budget’ and that this search was ‘not an easy search.’

‘I’m obviously going to struggle finding something in my budget in this area,’ he admitted.

The second house was located in Bramley, which was an area Max liked, but further away from the city center than his initial idea.

The 1930s property was going for £230,000 and had nice proportions. The kitchen and separate dining room had the potential to be turned into an open space living area, however, Max was not sold on the location.

‘I don’t know if I got the feels,’ he told Kirstie and Phil, who joined him for the visit. 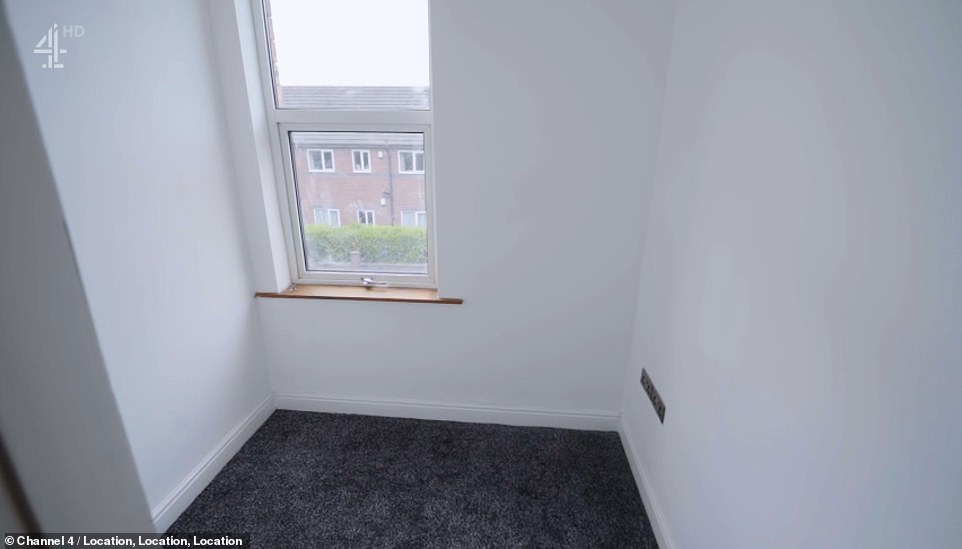 Newly refurnished but not in a great location! The third house was completely refurbished and had the number of rooms Max wanted, but its location left a lot to be desired 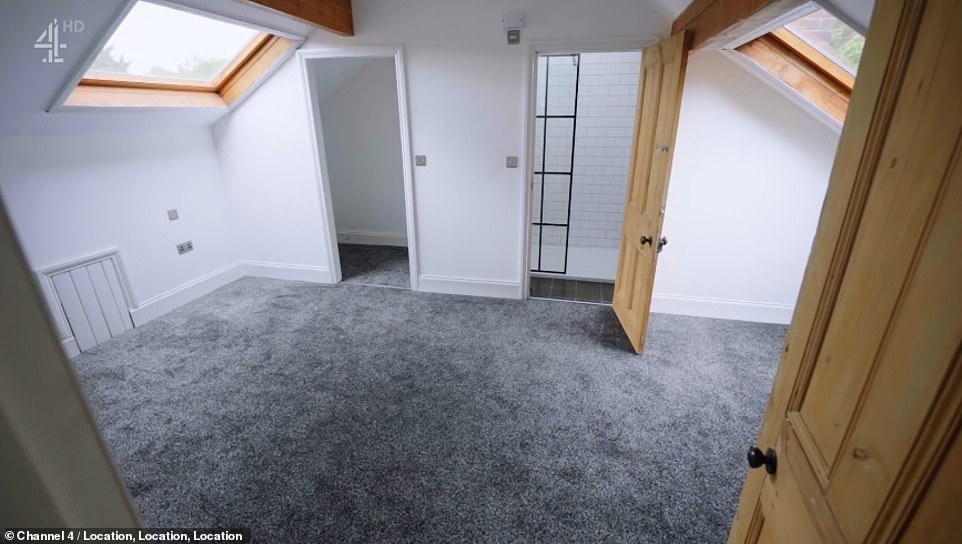 The third room also came with a loft conversion that has its own en-suite bathroom, perfect for renting out like Max had planned

The prospective buyer explained that while he believed Bramley was a nice area, he had not visited enough houses in this part of town to be able to compare with other houses.

The third and final house Max visited was also located in Bramley, and at £230,000, it came to the market completely refurbished.

It was also the only four-bedroom house Kirstie could find that matched Max’s budget and requirements.

In order to find a four-bed, the agent had to compromise on location, and the property was located near a busy road.

‘The road’s a busy road but it looks like it’s going to be a nice house,’ Max said.

Kirstie tried to reason with Max, telling him: ‘You don’t need four bedrooms.’

However, the buyer wanted to go through with his plan.

‘I’ve had it in my head for so long, I’d need to see what the compromise is,’ he said.

‘In order to get four bedroom at his budget, sacrifices are on the area, there’s a busy road, it is not necessary, we could be somewhere better,’ Kirstie said.

However, even Max could see living by a busy road just to score four bedrooms he didn’t near was ‘not worth it.’ 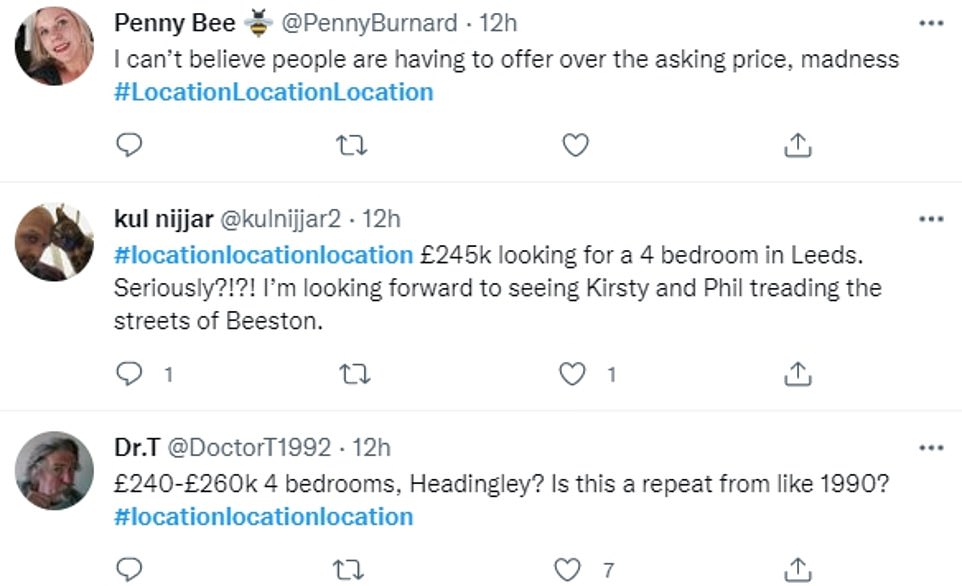 Viewers were not convinced that Max would find what he was looking for in a central location with a budget of £245,000, and said his head was ‘in the clouds’

‘You’ve showed me such a good selection of stuff: a two-bed in a good area, a three-bed that had potential, and then showed me something that ticked all of my boxes but was in a worse area,’ he told Kirstie.

However, Max decided not to put an offer on any of the houses he saw, instead decided to go on with his search.

‘I feel like I have progressed, I’d still be looking for four-beds if I hadn’t met you guys,’ he told the agent. ‘I can get a nice house or a flat in a decent area for the money that I got and you gave me the tools to actually find it.’

While Max was happy with the lessons of his search, his initial list of demands was deemed unrealistic’ by the show’s viewers.

‘Max’s head is literally in the clouds,’ one said.

‘Having lived in Leeds all my life if that guy gets a place for 245K in a decent area I’d be amazed,’ another wrote.