As Mykola Kulichenko stumbled out of the Russian military jeep, his body aching from another beating after three days of torture and with a blindfold over his eyes, he realized that he was about to be executed.

Beside him stood his older brother Dmytro, 37, and Evheniy, the youngest in their close-knit family at 30. Like him, their legs were tied, their hands bound, their bodies battered and bruised.

And they could hear the sound of their grave being dug beneath the poplar trees near Vyshneve, a usually peaceful part of northern Ukraine close to the Belarus border.

The Russian soldiers did not say anything as the three terrified brothers stood there. There was a shot – and Mykola realized Evheniy had fallen to the ground. 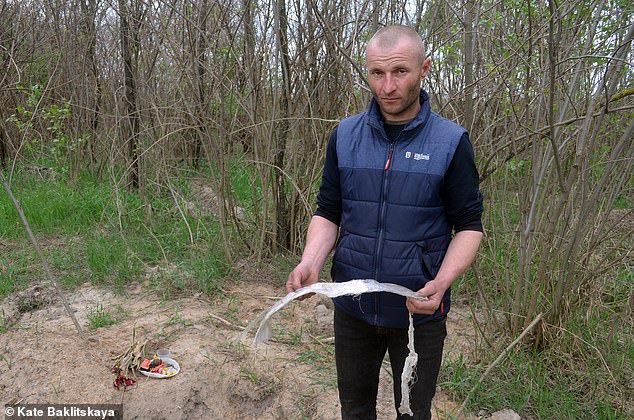 As Mykola Kulichenko stumbled out of the Russian military jeep, his body aching from another beating after three days of torture and with a blindfold over his eyes, he realized that he was about to be executed

‘I just heard the sound of a click, like their pistols had silencers on,’ he recalled. ‘Then they started making fun, saying, ‘Oh, your younger one is ready’, as he was lying there.

‘Then they shot Dmytro, who was standing next to me. There was another click and he dropped. And then they shot me.’

There have been many sordid revelations of atrocities, barbarity and callous war crimes over the past 11 weeks after Vladimir Putin’s decision to send his military forces rampaging into Ukraine.

But the story this 33-year-old man is telling me sounds like something from a horror movie. He survived his own execution – and then pushed aside his brother’s body and the covering soil to crawl out of his shallow grave and stagger his way to salvation.

Incredibly, the bullet made only superficial wounds as it passed through his head. It entered through his right cheek and exited in soft tissue beside his ear, leaving just a small hole in his flesh.

‘It was scary, of course, but I did not feel anything,’ said Mykola, a rural laborer. ‘It was not painful. I was in shock. I could feel the blood dropping from my cheek.’

His story is remarkable. Not only did he survive the execution squad meant to kill him, but he then evaded the heavy Russian military presence in occupied Ukrainian territory to find his way to the home of an elderly good Samaritan. 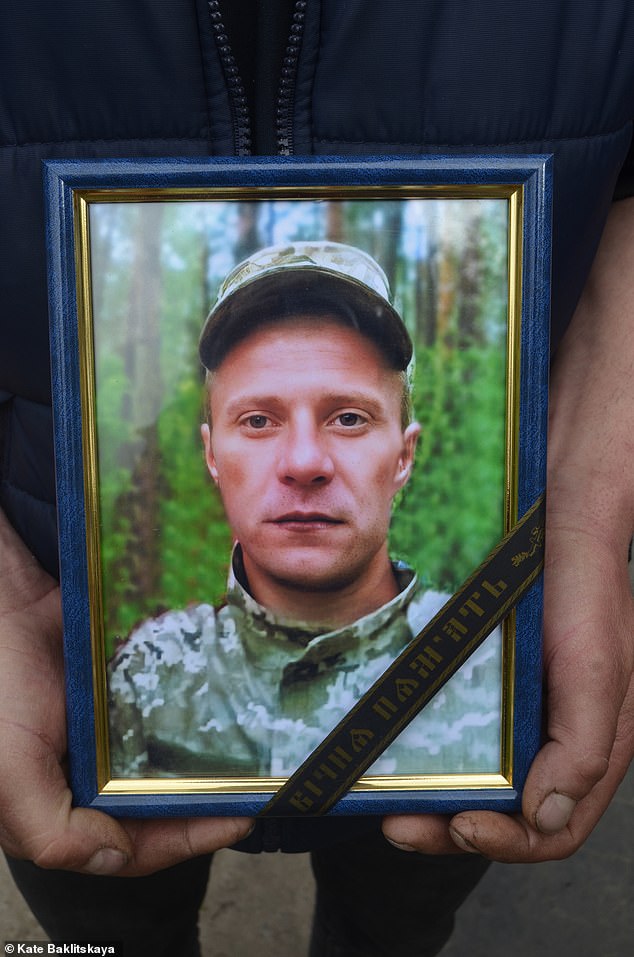 ‘I just heard the sound of a click, like their pistols had silencers on,’ he recalled. ‘Then they started making fun, saying, ‘Oh, your younger one is ready’, as he was lying there. ‘Then they shot Dmytro, who was standing next to me. There was another click and he dropped

‘I saw that he was severely beaten and he was blue. He was covered in soil. I took him inside and gave him breakfast and to wash his face, ‘said Valentina. ‘Every time we meet we hug – he’s like family to me now.’

Yet Mykola is still coming to terms with the awful loss of his real family members due to the inhumanity of some Russian troops who took over the sleepy village of Dovzhyk where he lived with his two brothers and sister Iryna.

Their nightmare began with loud explosions near their home early on the morning of March 18, followed by rumors swirling around their village that some Russian hardware nearby had been destroyed.

Yet the day seemed normal. They ate lunch, then Dmytro and Evheniy gave each other haircuts while Iryna went to visit a neighbor. She hid from the Russian soldiers who were prowling around the village ‘because they were shooting any civilians they saw in the street’.

Suddenly Mykola saw a Tigr – a 4×4 Russian military vehicle used by infantry – parked outside their home. Soldiers demanded their documents, then two of them entered the house and found a packed military bag by the living room sofa.

It belonged to Evheniy, who spent six years serving as a military medic. He had seen fighting on the Donbas frontline against Russian-backed separatists and was hoping to serve again in the latest Ukrainian struggle to save their country. 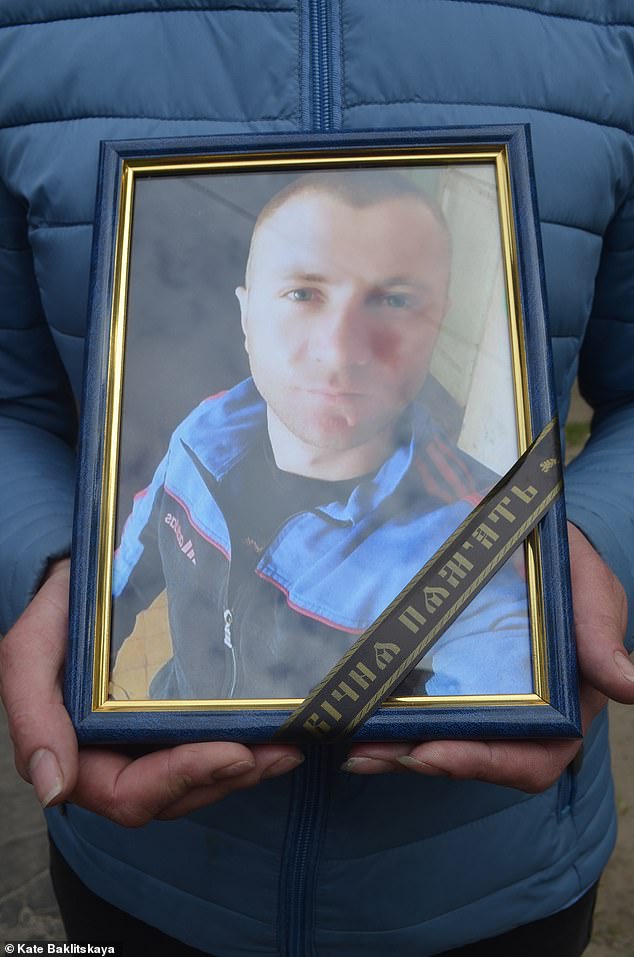 Beside him stood his older brother Dmytro, 37, and Evheniy, pictured, the youngest in their close-knit family at 30. Like him, their legs were tied, their hands bound, their bodies battered and bruised

The Russians forced the youngest brother on to his knees and began beating him with a chair leg fashioned into a bat found in his bag. Mykola said: ‘They were asking, ‘why were you killing our boys?’ They were threatening to kill us, shooting rounds in the air.’

The soldiers also found medals awarded to their grandfather during the Second World War. ‘They said to him that these are your medals because you were killing our boys,’ Mykola said.

Eventually they put all three men in their vehicle, placing sacks grabbed from a neighbor over their heads, before transferring them into an armed personnel carrier and ferrying them off to a timber yard 25 miles away in Vyshneve.

The brothers were held for three days in a workshop alongside wounded Ukrainian soldiers. They were kept hooded and tied up, beaten frequently and fed once a day.

At night, they were freezing cold, with only thin blankets thrown over their bound bodies by the guards. Mykola was miserable, separated from his brothers and lonely because ‘if someone tried chatting, they would be beaten’.

In the early evening of March 20, they were given an especially brutal beating. ‘They didn’t warn us what was going to happen when they took us away. I was nearly fainting.’

He was confused when loaded into an army jeep. ‘I did not really understand what was happening. I did not know where we were going or why.’

But once they stopped, he realized the end of his life loomed. After the shootings, he was kicked into the freshly dug grave beside a wheat field, landing on top of Evheniy’s body. The corpse of his older brother was then thrown on top before a thin layer of soil was scattered over them.

‘I fell face down and that saved me. I was able to push myself up and after a couple of minutes I started pushing. I was afraid but I was not thinking. I started suffocating in the pit.’

After escaping, he felt the body of Dmytro slide into the vacated space. ‘When I crawled out the soldiers were not there. I tried to come back to my senses. I took off the blindfold. I could not untie the string on my wrist cutting into my skin. But I untied my legs and started walking with my hands still tied. I walked and walked until I saw an empty house that I entered and rested there for the night.’

He began walking again the next morning before dawn, making it to Valentina’s house. She gave him warm clothes and, helped by other Ukrainians, he walked back to Dovzhyk to meet up with his distraught sister. Iryna was shocked at the sight of her brother. ‘He was beaten up, he had a wound on his cheek, he was barely walking – and he told me he had got out of a grave after they were shot dead,’ she said. ‘I asked about the other boys and he said they’re gone.’

She weeps as she recalls this moment. ‘I could not believe they were dead. I don’t understand why the Russians would kill them – they are just simple village guys.’

The pair determined to find the grave. It took them one month before, aided by Ukraine’s intelligence agency, they found the site. The bodies were found on April 18, which was Evheniy’s birthday, and buried three days later on Dmytro’s birthday. ‘I searched for them until I saw it with my own eyes,’ said Iryna. ‘I hoped that they were still alive until I saw their dead bodies.’

Ukraine’s public prosecutor has launched a war crime investigation after confirming the two bodies were found bound and shot in the head. Investigators are also probing claims that a collaborator in their village of 700 people tipped off Russian forces about Evheniy’s military service.

While Mykola’s facial wound has healed, the psychological scars run deep. ‘The Russians were our neighbors. Evheniy worked in Russia. Many other people from here went there to work on construction sites. Now there is only hatred,’ he said.