Cryptocurrency markets are crashing around the world with people cashing out due to post-pandemic inflation and cost of living increases.

The market experienced one of its worst weekends in the currency’s brief history, with major coins Bitcoin and Ethereum the worst affected.

Experts say this is a landmark period for the digital phenomenon and have recommended against reinvesting during the current skid – with the potential for prices to fall as much as another 50 per cent.

‘Bitcoin looks poised to crash to $20K and Ethereum to $1K. If so, the entire market cap of nearly 20K digital tokens would sink below $800 billion, from nearly $3 trillion at its peak,’ Chief Economist & Global Strategist at Europac Peter Schiff said.

The plunge in cryptocurrency values ​​in recent weeks has sent many spiralling into dark mental health holes – some so bad they even attempted suicide. 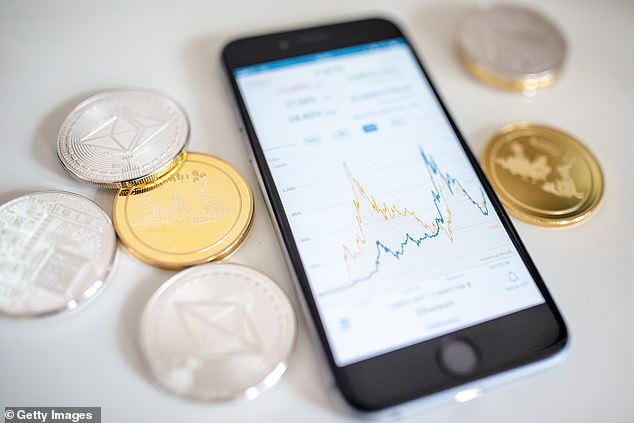 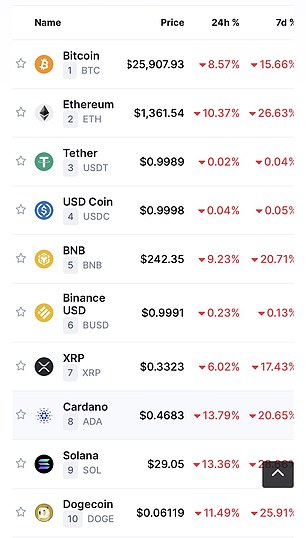 The market experienced one of its worst weekends in the currency’s brief history, with major coins Bitcoin and Ethereum the worst affected

Bitcoin, the most valuable and popular cryptocurrency coin, saw a single day loss above 8 per cent on Saturday.

Ethereum had an even worse weekend, dropping around 10.5 per cent on Saturday and nearly 30 per cent in the past week.

it has been the third-worst cycle for the two coins – following the 80 per cent overall losses between 2013 and 2015, and crypto’s worst ever crash in late 2017 and early 2018 which saw Bitcoin fall 83 per cent and Ethereum a shocking 94 per cent.

Mr Schiff believes the crashing markets are directly tied to skyrocketing inflation and cost of living – with US data released Friday showing inflation had grown 1 per cent rather than the expected 0.7.

‘With food and energy prices soaring, many Bitcoin HODLers will be forced to sell to cover the cost. Grocery stores and gas stations don’t accept Bitcoin. When Bitcoin crashed during Covid no one needed to sell,’ the global economist said.

‘Consumer prices were much lower and HODLers got stimulus checks. The need to sell Bitcoin to pay the bills will only get worse as the recession deepens and many HODLers lose their jobs, especially those working for soon to be bankrupt blockchain companies.

‘If circumstances change, long-term buyers without paychecks will be forced to sell.’

HODLers is a crypto slang term to describe a stategy used by buy-and-hold traders, rather than people buying and selling with every dip. 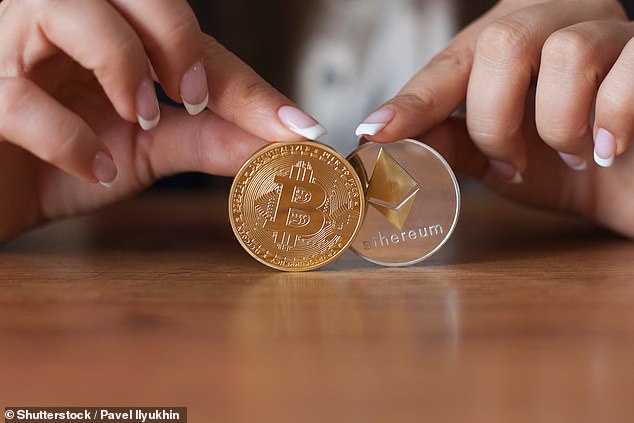 There are other factors at play that can be attributed to the crash, including Ethereum moving over its mining system to a more energy-efficient model, but most experts believe it’s more related to everyday people pulling out their money.

Its haemorrhaging at one stage got so bad, US$200million was sold off in just one day.

Nine of the top 10 cryptocurrencies have fallen by at least 3 per cent in the last with, with only Cardano experiencing a gain.

David Gerard, an author and crypto expert, said a lack of regulation has doomed the industry and said everyday Australians will be the victims of the latest crash.

‘We have to think about the real victims, the mums and dads, the grannies who think their retirement should go into crypto. There’s a real human cost here and that’s the ordinary people who get scammed,’ he told 60 Minutes.

‘You can’t get rich for free. You’d think that was obvious, but people keep hoping there’s a way out and that they’ll get ahead, but it’s always a false hope. Some people do great but more people get absolutely wrecked.’

He said anyone who started investing in crypto in the last six months have instead been sold ‘magic beans’.

‘They’re trying to work out how to offload them. A lot of them are just going to have to take the hit and it’s not going to be nice,’ he said.

It was one of the world’s biggest cryptocurrencies, but after a coordinated attack on its systems, Terra Luna is now worthless.

The financial massacre didn’t just leave thousands of keen investors millions out of pocket, it also sent many spiralling into dark mental health holes – some so bad they even attempted suicide.

Others were forced to hide in their homes as their friends furiously attempted to confront them, banging on their door demanding answers and retribution.

On the sub-Reddit for TerraLuna, the main place of discussion for the self-described ‘LUNAtics’, one terrified investor today asked for advice.

‘My friends who I recommended Luna to all hate me now,’ they wrote.

‘Many angry calls and loud knocking at my door from former friends I told to buy Luna early, I feel like s**t we all lost our life savings and they have kids. What do I do?’

Terra Luna, which was once in the world’s top few cryptocurrencies, began to falter on May 8, with many investors cutting their losses and selling off their coins.

Similar to a run on the banks, the selloff triggered a death spiral, making the cryptocurrency worthless.

TerraUSD, a stablecoin system, was always tied to the US dollar in an attempt to create stability and security for investors.

The sudden collapse of both Terra and Luna, wiping billions off its value, didn’t just anger investors, it also made many grapple with suicidal thoughts.

‘I lost over $450k USD, I cannot pay the bank. I will lose my home soon. I’ll become homeless. Suicide is the only way out for me,’ one wrote.

‘I’m going through some of the darkest, most severe mental pain of my life. It still doesn’t seem real that I lost $US180,000… When I make it through this, I’ll be stronger then ever,’ another added.

In another story after the crash, an investor begged people to seek out mental health support after their own friend tried to take their own life.

‘My friend and ex-colleague (my manager for 15 years) tried to commit suicide this morning. He basically moved all of his savings to crypto in 2021 and LUNA was a massive player in his portfolio, ‘they wrote.

‘Just wanted to tell you guys – if you feel pain and you think your life is miserable without money, you feel failure and stuff… just come to people you love.

‘Do not be alone, this s**t is getting serious. Do not overestimate the value of money, life has a much higher value. I do not post to Reddit at all, but I considered it important to do it now. Wish you good luck.’

A third told their own story of surviving a suicide attempt years earlier, in a bid to determine other Luna investors from taking the same route.

‘If you’re considering ending your life, I sincerely hope you re-consider your feelings,’ they wrote.

‘Whatever it is you’re going through, like everything else in life that ever was, shall pass. A brighter day will come, and you will be surprised how life will open its doors back up for you when you allow it to.’