Lawmakers and gun control activists are divided on whether to claim victory on Sunday after a bipartisan group of senators announced they have come to an agreement on a framework for gun control legislation.

President Joe Biden said that he will sign the framework as soon as it comes to his desk.

The deal would incentivize ‘red flag’ laws but would not include provisions championed by Democrats up to Biden himself, like increasing the age to purchase certain rifles to 21 or a ban on assault weapons.

‘I continue to believe military-style assault weapons that can shred the bodies of their victims have no place in civilian use—but we cannot let the perfect Congressional response be the enemy of the good,’ Senate Majority Whip Dick Durbin wrote on Twitter Sunday .

‘Though this agreement falls short in this and other respects, it can and will make our nation safer.’

‘I support these bipartisan measures that would begin to curb gun violence in America. I hope my colleagues on both sides of the aisle will find a way to make these changes and provide these resources. We need to continue our efforts to pass common sense gun safety laws,’ Booker wrote on Twitter.

Biden said on Sunday after the compromise was unveiled, ‘Each day that passes, more children are killed in this country: the sooner it comes to my desk, the sooner I can sign it, and the sooner we can use these measures to save lives .’

While the deal is substantially less than the House bills passed last week and is weaker than what Democrats want, it does provide the framework for the most significant federal gun restrictions in nearly three decades. 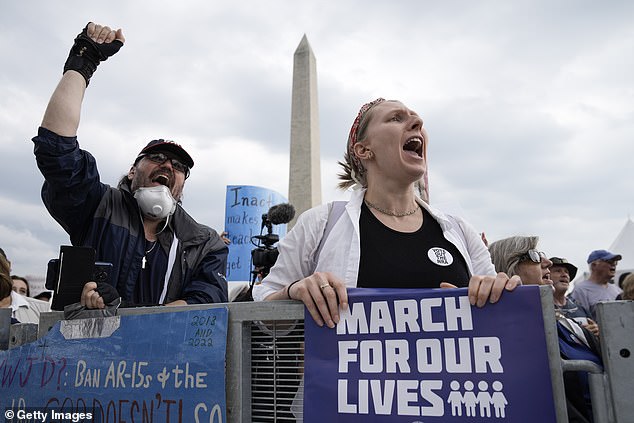 A bipartisan group of senators are preparing to unveil on Sunday a parred back version of the House-passed gun control framework that will be the biggest in nearly three decades. Pictured: Gun control demonstrators attend the March for Our Lives rally in Washington, DC on Saturday, June 11, 2022

Biden immediately lauded the deal and the senators who put it together as news of the proposal became public.

‘I want to thank Senator Chris Murphy and the members of his bipartisan group — especially Senators Cornyn, Cinema, and Tillis — for their tireless work to produce this proposal,’ he wrote in a statement on the bipartisan efforts.

‘Obviously, it does not do everything that I think is needed, but it reflects important steps in the right direction, and would be the most significant gun safety legislation to pass Congress in decades,’ he continued. ‘With bipartisan support, there are no excuses for delay, and no reason why it should not quickly move through the Senate and the House.’

The deal reached in the upper chamber combines a pair of modest gun restrictions while significant mental health and school safety investments. Thousands of advocates for more gun control legislation descended on the National Mall in Washington, DC on Saturday for this year’s March for Our Lives rally just a few weeks after an elementary school mass shooting Uvalde, Texas left 19 students and two teachers dead

Core lawmakers behind the Senate deal are Democratic Senators Chris Murphy of Connecticut and Kysten Cinema of Arizona, as well as Republican Senators John Cornyn of Texas and Thom Tillis of North Carolina.

The four individuals are still working on writing and finalizing the legislative text, but are confident it will have the support of at least 60 senators, which is the threshold needed for legislation to pass in the upper chamber.

Senate Majority Leader Chuck Schumer called the legislation ‘a good first step to ending the persistent inaction to the gun violence epidemic that has plagued our country and terrorized our children for far too long.’

‘Once the text of this agreement is finalized, I will put this bill on the floor as soon as possible so that the Senate can act quickly to advance gun-safety legislation,’ he added.

But some House Democrats have already said that they would not support a bill from the Senate that is more symbolic than true action.

‘I am disappointed to hear [the] vote focus[es] on increased criminalization and juvenile criminalization, instead of really having the focus on guns,’ Representative Alexandria Ocasio-Cortez told CNN’s State of the Union on Sunday morning.

The progressive lawmaker said that if the Senate includes background checks, she would vote yes on their bill when it goes for reconciliation in the lower chamber.

‘If we’re talking about just using this as an excuse to dramatically increase an enforcement mechanism that we know is not capable right now of preventing mass shootings, then I’m not really interested in doing something for show for the American public,’ she told CNN host Dana Bash.

The New York Democrat said she would vote for the bill ‘if we get a real baby step [passed]not kind of a distraction, I think, from the solution.’

One of the most potentially restrictive aspects of the tentative deal would establish a federal grant program to encourage the creation of ‘red flag’ laws, which would allow authorities to prevent people from buying guns who are deemed by a judge to be a threat to themselves or others.

It would also require for the first time that federal criminal background checks for those seeking to buy a gun under the age of 21 include a search of their juvenile justice records, according to the Sunday Post report.

What the compromise does not include, however, is a provision pushed by Democrats and President Joe Biden that would raise the minimum age to purchase certain rifles from 18 to 21 – while it is already federal law that individuals must be 21 to purchase a handgun. 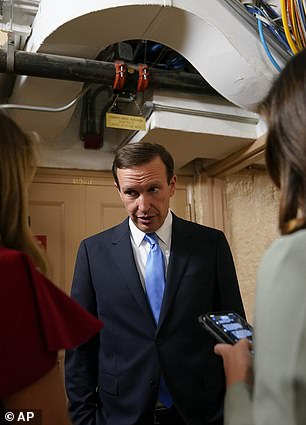 Senators Chris Murphy (left), a Democrat, and John Cornyn (right), a Republican, are among the lawmakers who helped craft the bipartisan deal in the upper chamber

A long held argument from gun rights activists is that rifles are hunting guns and should be permitted to be purchased by a legal adult.

The pending deal also could give billions to mental health care and new infrastructure and armed officers for school security programs.

Senators Roy Blunt of Missouri, a Republican, and Debbie Stabenow of Michigan, a Democrat, want to establish a nationwide network of ‘community behavioral health clinics,’ which several senators said last week could be a cornerstone of any Senate gun legislation deal.

A bipartisan group of lawmakers began crash negotiations last month following two mass shootings in the span of less than two weeks – one at a supermarket in Buffalo, New York that left 10 dead and an elementary school massacre in Uvalde, Texas that left 19 children and two teachers dead.

The midday Sunday announcement also comes just a day after thousands of gun control advocates descended on Washington, DC for this year’s March for Our Lives rally on the National Mall.