Americans should avoid ‘prolonged’ skin-to-skin contact in clubs and bars in order to avoid catching monkeypox this Pride doctors in Florida warned Thursday, as the US infection tally surged into triple-figures.

Speaking at a briefing, Dr Zachary Henry — who spotted a case of monkeypox in his clinic — also warned people to stay away from others with unusual rashes.

The sexual health expert at the AIDS Healthcare Foundation added there was no need to wear face masks because the tropical disease took ‘hours’ to spread through the air between people.

Scientists say monkeypox spreads through touching infectious lesions on patients. They may be anywhere on the body — including the face, arms and genitals. It can also be passed through the air during sustained face-to-face contact.

Henry — appearing with Dr Margaret Gorensek — was speaking ahead of a Pride march in Fort Lauderdale, Florida, this Saturday which could draw more than 100,000 spectators. Most states such as New York and Chicago, Illinois, will hold their celebrations next weekend.

Both experts warned monkeypox was likely already spreading undetected in Florida, after a scientist said earlier this week it was also transmitting under the radar in Massachusetts.

America has recorded 100 cases of monkeypox so far, with Maryland and Oregon now being the twentieth and twenty-first states to spot the rash-causing virus.

Globally more than 1,000 infections have been detected across 35 nations in the ‘biggest outbreak’ outside of Africa — where it is native — to date. But no deaths have been registered yet. 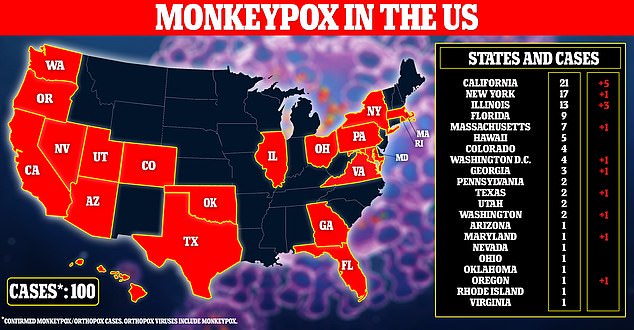 America’s monkeypox cases tally has now hit 100. The table on the left shows the number of cases in each state, and the number of infections recorded per state over the last 24 hours. Maryland and Oregon today recorded their first cases of the virus 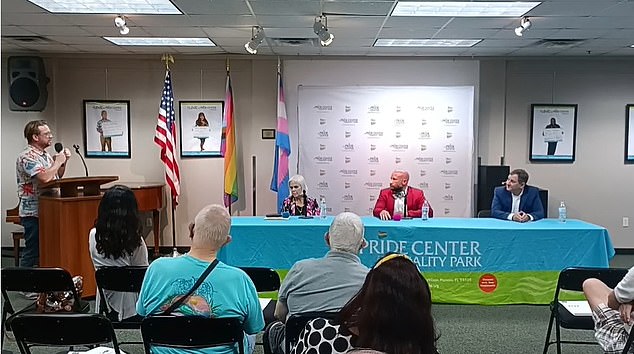 The doctors warned people to avoid skin-to-skin contact that is prolonged during a briefing yesterday. Pictured above from left to right is Dr Margaret Gorensek, an infectious disease expert at Holy Cross Medical Group, Dr Zachary Henry, a sexual health expert at AIDS Healthcare Foundation, and Dr Frank Vittimberga, the chief medical officer for the Florida Medical Center 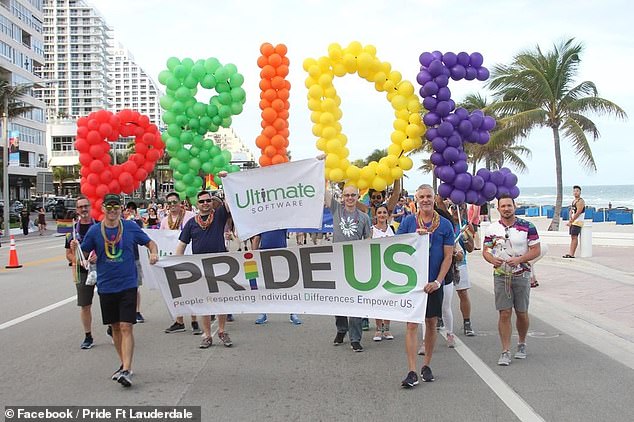 Organizers of the Pride parade in Fort Lauderdale say it is expected to attract up to 100,000 people. Pictured above is a previous parade in the city

Speaking at the town hall on monkeypox, Henry said: ‘Going out at Pride, going to the stores, the restaurants, the bars — if you are avoiding prolonged skin-to-skin contact that should be safe.

‘The only other method of transmitting monkeypox is through respiratory droplets, but that’s rare.

‘If you are not touching someone, you would need to be indoors without a mask for several hours — if not more — to catch it.

WHO investigating if monkeypox can spread through semen

The World Health Organization (WHO) has said it will investigate whether monkeypox can be passed on through semen.

Currently, scientists say it may spread through sex due to physical contact with infectious skin lesions on the genital area or other parts of the body.

But this week Italian scientists said they had detected fragments of the virus in semen — raising the possibility it could transmit through this route.

German scientists say they have also detected the virus in semen.

A WHO official revealed they were looking into the reports Wednesday.

The agency’s monkeypox incident manager Catherine Smallwood said: ‘We really need to focus on the most frequent mode of transmission and we clearly see that to be associated with skin-to-skin contact.’

More than 2,000 cases have been detected globally outside of West Africa, where it is endemic.

These are mostly among gay and bisexual men.

But scientists warn the rash-causing virus spreads through close personal contact, and it is likely the disease could spill over into other groups.

‘So you can go outside at the Parade, don’t be afraid to go for pubs and bars but watch for the rashes and look at what is on their body.’

He added: ‘Essentially you don’t want prolonged skin-to-skin contact with someone who has that rash.

‘For people who might recreationally enjoy dark rooms or commercial sex clubs where you can’t see what’s on the person’s body — now is not the time to be there.’

‘There would be less risk going to concerts and gatherings — that is not high risk,’ she said. ‘But skin-to-skin contact puts you more in that category.

‘We don’t have a high number of cases [in Florida] but we can get to that point.’

Zachary explained the monkeypox patient he treated had started developing rashes about a day after having sex with another individual.

He said this suggested that the case had been infected before having sex with that person by another, as yet un-identified, person. The person he had sex with was also now likely infected.

Columbus in Ohio and Portland in Oregon — which have each detected one monkeypox case — are also due to hold Pride parades this weekend. But neither has issued any guidance on how to stay safe from the tropical disease during the celebrations.

The organizers of New York City pride — which attracts up to two million people and is the largest in America — have, however, issued guidance on how to protect yourself against the disease.

In an Instagram post on Monday they called on anyone with a rash who did not feel unwell not to attend events.

They also said anyone experiencing a fever, headache or swollen glands should contact their health provider for testing.

They said: ‘The risk to most people still remains low, but knowledge empowers our community to protect its health.’

Chicago also warned people who did not feel well or had an unusual rash to stay away from summer parties and festivals this week.

America has now recorded 100 cases of monkeypox across 21 states with the most in California, New York and Illinois.

Many infections are among gay and bisexual men and linked back to international travel. But a growing number are among people with no links to foreign travel or another known case — suggesting the virus is spreading in the country under the radar. 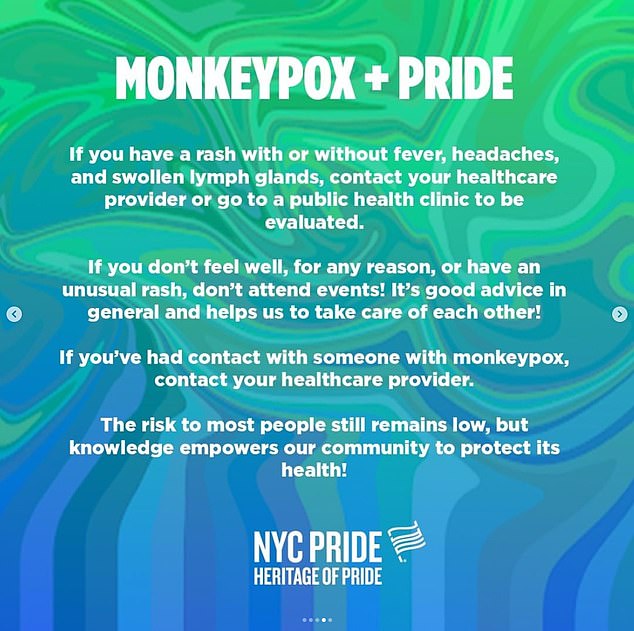 New York City Pride organizers have also issued guidance for people looking to attend the parades. They call on those with a rash or who feel unwell to ‘stay away’ 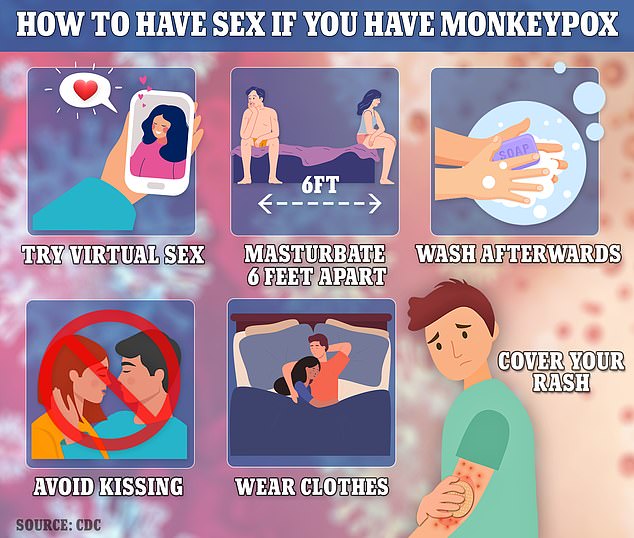 It comes after DailyMail.com revealed the Centers for Disease Control and Prevention (CDC) had published bizarre guidance on how to have sex while infected with monkeypox.

It states that anyone who is infected with the disease should not have sex.

But for those who ignore the advice, it has published a list of the dos and donts under the bedsheets.

Other advice was to avoid kissing, wash hands, fetish gear and clothes immediately afterwards and even to consider having sex virtually such as over the phone.

People catch monkeypox by touching infectious skin lesions, but it can also be spread through the air during ‘sustained’ face-to-face contact.

It can take up to four weeks for anyone infected with monkeypox to recover from the disease, with about eight days needed from infection for symptoms to appear.