While memory loss, confusion and disorientation are all well-known signs of Alzheimer’s disease, experts have also discovered dozens of subtle behaviors that could point to the condition.

From preferring slapstick comedy to wearing scruffy clothes, research suggests there are many changes that could hint at the early stages of Alzheimer’s before the characteristic forgetfullness sets in.

And now they’ve uncovered another.

Researchers from the University of Southern California (USC), in Los Angeles, found elderly people who were more willing to give away money to a person they do not know are more at risk of the disease.

Alzheimer’s affects around 850,000 people in the UK and 5.8million in the US but experts fear rates are going to soar across the world in the coming decades, with populations aging.

Here, MailOnline reveals some of the other unusual signs you or a loved one could have Alzheimer’s. 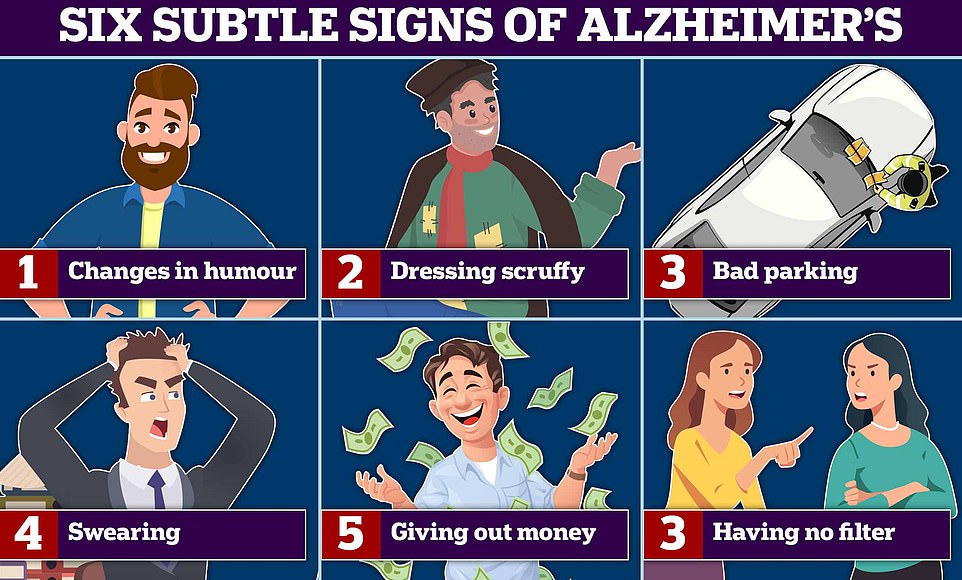 Elderly people are known to be more at risk of scams but the latest research also shows handing out money may potentially be an early sign of Alzheimer’s.

Researchers from USC and Bar-Ilan University University in Ramat Gan, Israel, found financial altruism was significantly linked with being at the first stages of the disease.

The researchers gathered 67 elderly adults around the age of 70 for the study.

Each participant was paired with another person they had never met before in a lab environment, and handed $10 (£8) to distribute between themselves and the other.

The elderly participants were also given tests to judge their current cognitive state and their potential risk of developing Alzheimer’s.

Researchers found that those who were willing to give more money to a person they had never met before were also often in a worse cognitive state and tested higher for Alzheimer’s risk.

The results, published their findings in the Journal of Alzheimer’s Disease, suggested the disease’s effects on the brain could have a knock-on effect that makes people more vulnerable.

Dr Duke Han, a neuropsychology professor at USC who led the research, said: ‘Trouble handling money is thought to be one of the early signs of Alzheimer’s disease, and this finding supports that notion.’

Alzheimer’s disease is a progressive, degenerative disease of the brain, in which build-up of abnormal proteins causes nerve cells to die.

This disrupts the transmitters that carry messages, and causes the brain to shrink.

More than 5 million people suffer from the disease in the US, where it is the 6th leading cause of death, and more than 1 million Britons have it.

As brain cells die, the functions they provide are lost.

That includes memory, orientation and the ability to think and reason.

The progress of the disease is slow and gradual.

On average, patients live five to seven years after diagnosis, but some may live for ten to 15 years.

Being a big fan of Mr Bean could be another sign of Alzheimer’s, according to research.

University College London (UCL) researchers found people suffering with the disease were more likely to enjoy slapstick over satirical or absurdist comedy shows than healthy adults of the same age.

Friends and relatives of 48 people with Alzheimer’s and frontotemporal dementia (FTD) — an uncommon type of dementia that causes problems with behavior and language — were given questionnaires about their loved one’s liking for different kinds of comedy.

Family members were also asked if their relative had shifted their preference over the last 15 years and if they ever noticed any inappropriate humor more recently.

The study, published in the Journal of Alzheimer’s Disease in 2015, found people with Alzheimer’s started to prefer slapstick jokes around nine years before the start of typical dementia symptoms.

People with FTD were also more likely to laugh at tragic events on the news or in their personal life, or events others would not find funny such as a badly parked car or barking dog.

Researchers said more studies are needed to determine the exact cause of the changes in humor, but most behavioral changes after developing Alzheimer’s are caused by the brain shrinking in the frontal lobe.

People with Alzheimer’s can also struggle with choosing clothes that go well together and wearing things that are weather-appropriate when left unaided.

Researchers at the universities of Kent and York described how people suffering with dementia — which is most commonly caused by Alzheimer’s — became less able to dress themselves.

The research, published in Sociology of Health and Illness in 2018, studied 32 people across three care homes and 15 regular homes in Kent.

Melissa, a family carer who was quoted in the study, described her devastation after her father started to change how he was dressing when he got Alzheimer’s.

She said: ‘I’ve never seen my dad scruffy. Never. Until that day I turned up in the home and he’s sitting there in screwed up clothes which really hurt me because I’m not used to that – not at all.’

Carers also described difficulties getting people with more advanced dementia into clothes, having to guide their arms and give encouragement.

Changes in dressing can be caused by a variety of Alzheimer’s effects, from forgetting the clothes belong to them to muscle stiffness and sudden jolty movements making it harder to put them on.

Alzheimer’s patient’s driving can also get significantly worse as the condition starts to affect their motor skills and thought processes, studies show.

The disease slows people’s reactions, making them worse at parking and eventually forcing them to give up the keys to their car.

Stopping driving can often cause people with the memory-robbing condition to become stressed and agitated, because of the perceived sacrifice in autonomy.

Researchers from Washington University in St Louis studied driving habits in 139 people over a year to see how the disease impacted them. Half were diagnosed with early Alzheimer’s while the other half were not.

The study, published in Alzheimer’s Research and Therapy in 2021, found those with the disease were significantly more likely to make abrupt changes in direction and drive slower.

The changes were so stark, researchers were able to create a model to predict if people had Alzheimer’s based on their driving alone.

The model predicted cases accurately in 90 per cent of the people.

Another sign of Alzheimer’s can be becoming more of a potty mouth — particularly in inappropriate situations.

The filter people normally use to stop themselves swearing in front of children, for example, is no longer as strong, resulting in more profanities.

Researchers from the University of California, Los Angeles, found 18 per cent of people with FTD used the word ‘f**k’ when prompted to words beginning with ‘f’. This compares to none of those who had Alzheimer’s.

The study of 70 patients, published in Cognitive and Behavioral Neurology in 2010, asked patients to name as many words as they could think of beginning with letters ‘f’, ‘a’ and ‘s’ in a minute.

While the study did not provide any raw data, it showed six of the 32 dementia patients said the swear word when asked to list words for ‘f’, and more said the word ‘s**t’ for ‘s’.

Similarly to swearing, as Alzheimer’s patients’ brains change, they’re ability to filter what they say and how they act tends to degenerate in many cases.

People can become rude, say inappropriate things, start undressing in public or begin talking to strangers more often than they previously would have.

Experts say patients can also lose their sexual inhibitions in some circumstances, for example by touching inappropriately in public.

They believe the change is caused by brain shrinking in the frontal prefrontal cortex in the frontal lobes of the brain — the part that controls our filter.

Alzheimer’s Society said: ‘These situations can be very confusing, distressing, shocking or frustrating for someone with dementia, as well as for those close to them.

‘The person with dementia may not understand why their behavior is considered inappropriate. It’s very unlikely that they are being inappropriate on purpose.’