Boots is one of those emblematic British companies which, alongside Marks & Spencer, enjoys special affection among UK consumers.

As well as being the great training engine for independent chemists, it is a trusted friend for vaccines, vitamins and its innovative beauty brand No 7.

Under the umbrella of Stefano Pessina’s sprawling Walgreens Boots Alliance global empire, partially financed by private equity, the High Street stalwart has been starved of the new investment required. 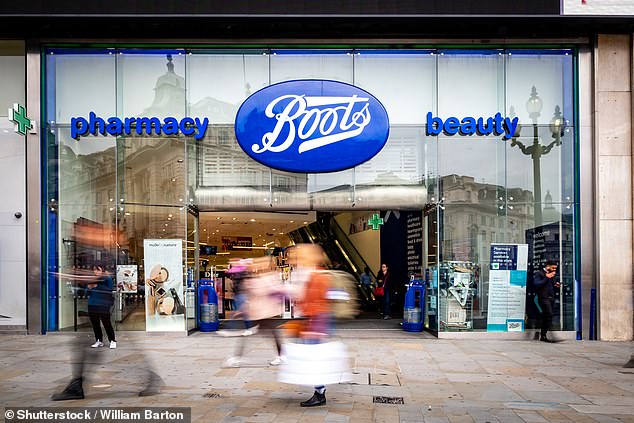 Scruffy: Much of Boots’ portfolio requires the kind of costly updates seen at some of its higher performing central London stores

With more than 2,000 stores across Britain, much of the portfolio requires the kind of costly updates seen at some of its higher performing central London stores.

It also needs a much more aggressive digital strategy. The glorious future envisaged by serial corporate chairman Nigel Rudd, when Boots was first merged with Pessina’s Allied Unichem in a £7billion deal in 2006, never really happened.

The Nottingham-based company, founded in the mid-19th century, simply became a far removed overseas arm of Walgreen, an over-borrowed drug store conglomerate primarily focused on the vast US market.

Throughout this period of ownership, it has lacked the decisive leadership which Archie Norman brought to M&S, where the ax was taken to underperforming High Street stores across the country and digital was embraced via a joint grocery venture with Ocado.

The decision of Pessina and Walgreens to seek a trade sale is understandable. It is cash in hand for the seller and removes the uncertainty and expenses of an initial public offering. Just look at the £500million fee and transaction costs involved in GSK’s split and float of its Haleon health care arm.

Potential Boots buyers have vanished in recent weeks so there will be relief that Reliance Industries, controlled by Indian billionaire Mukesh Ambani, has emerged as the favored acquirer in partnership with financial group Apollo.

Ambani is a known quantity in the UK as the owner of iconic toy store Hamleys. Reliance’s more significant UK interest is as the partner of M&S in India.

M&S’s joint venture in India is going through a restructuring with smaller stores being closed. Plans are afoot for opening 10 larger-format M&S ​​stores a year.

Ownership of Boots will not be easy. It is being challenged by the supermarkets in health and beauty, as well as by no-frills retailers such as B&M. The defined benefit pension funds are currently in surplus but could still become a sticking point.

Reliance Retail is a big beast with a hefty valuation. Whether it has the time or resources to work on a major turnaround in Britain is not clear.

What we do know is that sub-Continent owners – such as Tata at Jaguar Land Rover – have, in some cases, been good and long-term stewards of UK assets.

President Xi Jinping’s clampdown on free market capitalism looks as if it is ending. The leadership in Beijing is giving the green light to splitting off and floating Jack Ma’s financial technology pacemaker Ant Financial, part of his Alibaba group.

A prospectus is being prepared for quotes in Shanghai and Hong Kong.

Ant had planned to come to the market in November 2020 but China suddenly canceled the proposed £30billion float.

There was concern about Ma’s safety after he was deemed to have spoken out of turn when he went on social media boasting of the biggest float in financial history.

The chastened multi-billionaire eventually re-emerged after being personally identified by Chinese regulators for uncompetitive activities. Whether Ma will be rehabilitated with the Ant initial public offering is anyone’s guess.

After a wobble about domicile in 2018-19, it is terrific to see wound and surgical parts group Smith & Nephew (which I hold) backing Britain.

It is to establish an £80million plus R&D and manufacturing center in Hull with the aim of developing ‘next generation’ products for the NHS. It has been encouraged by a grant from the Government and is looking to generate £8billion of sales over the next decade.

S&N is joining AstraZeneca, which is investing heavily in life sciences in Cambridge, and GSK, which is to develop a biotech hub in Stevenage.

The EU is holding British participation in Horizon science funding hostage to the Northern Ireland protocol. But UK life science companies are getting on with the job.